This past Friday, 1/3/14, we visited Lakewood Brewing Company before packing up the van and heading out of town. We met with Wim Bens, Founder and President, for an interview and afterwards Craig Bradley, Marketing and Events Manager, showed us around the brew house.

Lakewood Brewing Company is located north east of Dallas in Garland, TX. It is named after the neighborhood of east Dallas, adjacent to White Rock Lake, where the founders began to homebrew. Wim explained, “Lakewood to us is something that is really inclusive. It’s neighborly, it’s a nice, tight knit community, and it’s friendly. And those are things that I think we embody as a brewery.” They sold their first keg in August of 2012 and since then have gone through three expansions, increasing capacity to about 10,000 barrels per annum, with another substantial expansion coming soon. The upgraded facilities will include a new tasting room with a 30 foot bar and space for up to 14 taps as well as an elevated roof to allow for much larger – 120 or 240 barrel – tanks.

The brewery opened with two beers, Hop Trapp and Rock Ryder, and is currently offering four year-round beers with the inclusion of Lakewood Lager and Temptress. In addition, four seasonal offerings round out the regular production. Included is the highly touted Bourbon Barrel Temptress which was just released in bottles for the first time this past December. Also keep an eye out for creative cask versions that are occasionally available at special events. Wim elaborated, “Beer is supposed to be fun and we like to have fun with what we make.” 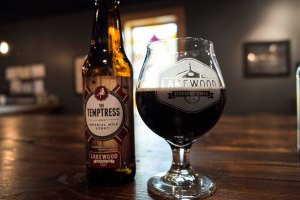 Notably, they have begun releasing one-and-done brews dubbed the Legendary Series. “We wanted the legendary beers to tell the story of a local or a Belgian legend,” said Wim Bens, who was born in Belgium. The story behind each legend can be found here. Currently, three beers have been released in the series. The first is Brabo’s Cut, a Belgian-style dark ale that was followed by a Biere de Garde named La Dame du Lac. The most recent release was Goatman, an India style Black Lager. Wim also announced the fourth installment in the Legendary Series will be Antigoon’s Revenge, tying up the Brabo legend. This Belgian golden strong ale will be made with cherry wood smoked malt. Pick them up quickly as they will never be brewed again.

Like many growing craft breweries, Lakewood loves to give back to the community and are constantly working with charities and organizations during special events and tours that are hosted every Saturday from 12-3pm.

We truly enjoyed speaking with Wim in the taproom and touring the facilities with Craig as guide. That morning the employees were hard at work bottling a fresh batch of Rock Ryder, a rye wheat beer that is refreshing with just a touch of that rye pepperiness, while the brewers were milling grains and patrolling the brew deck.

One thought on “#3 Lakewood Brewing Co. in Garland, TX”