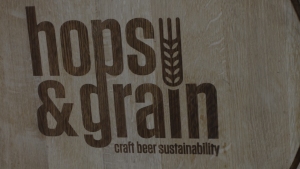 On Monday morning, 1/6/14, we visited Hops & Grain Brewery in Austin, TX and owner, Josh Hare, met with us to discuss his business and tour the brewery. Located just east of downtown where famed 6th Street dead-ends, Hops & Grain’s slogan is ‘Craft Beer Sustainability.’ Josh believes that a small business needs to have an identity that is “transparent and true.” The brewery is a member of 1% For The Planet, uses cans, which are easily recyclable, and even utilizes their spent grains by creating Brew Biscuits.

Josh shared that his interest in craft beer began while attending a private university that did not allow alcohol consumption, even after turning 21. He then began to homebrew and developed a love for sharing beer with others – that love was further expanded while spending time in Boulder, CO. He has a passion for the community and added, “from the producer side there is definitely a nice camaraderie.” Furthermore, from the consumer side “every brewery is being welcomed because it is something new to try. I think all of us as craft beer drinkers admit that we’re fairly promiscuous with our buying.”

Hops & Grain opened in October 2011 with two regular offerings: ALT-eration, German-style alt, and Pale Dog, a pale ale. By year two, a dry-hopped pale lager dubbed The One They Call Zoe was released.

The Greenhouse is a 3 bbl pilot system used by the brewers to experiment and be creative. These beers are available in the tap room which was recently moved and greatly expanded while the old taproom has been turned into a laboratory. While discussing allocation within limited space Josh expanded, “We decided we would rather have people come here than be able to buy an extra fermenter at this point.”

2014 will see the launch of the unique Greenhouse IPA series. 300 cases will be released monthly but each month the beer will experience a change in hop profile while maintaining the identical grain bill and packaging. Consumers can scan a code on the can that links to the brewery’s website and a description of the hops in that particular version. Other exciting creations from the Greenhouse include the Volumes of Oak (barrel aged), Volumes of Funk, and Del Roble releases. While experimenting with aged funky and sour beers released under the Volumes of Funk tag, Hops & Grain has utilized wine and bourbon barrels in a separate room. Del Roble translates to ‘of the oak’ in Spanish and the beers are 100% fermented in oak.

The new tap room, currently decorated with colorful 3-D portraits by local artist, Janice Fowler, is open Wed-Fri 2-8pm and Sat 12-6pm. Come in and enjoy a great conversation and great beer made sustainably! A huge thank you to Josh Hare for his hospitality. 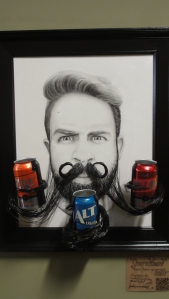