On Tuesday, 1/7/14 we got the chance to visit with the kind people over at Adelbert’s Brewery in north Austin. From day one, the brewery has been bottling their hand crafted Belgian-style ales which can be found all over Texas, as well as parts of South Florida, New York, California, and New Mexico.

Adelbert’s was established in 2010 by founder Scott Hovey as a tribute to his brother, George Adelbert Hovey (Del), who passed away in 2000. Scott spoke with us during our visit and told us some pretty crazy stories about Del that have inspired the naming of his beers. For instance, Del was in the Peace Corps in Columbia and was robbed of everything on him during a walk one day, including his clothes. He was able to find a convent of nuns so he hid his naked body behind a flock of sheep and yelled out for the sisters to help him. They gave him a blanket, some bus fare, and sent him on his way. That is where the Naked Nun Wit got its name, and equally ridiculous stories about Del have inspired the names of their other beers, too. One might even call him the utmost intriguing man on Earth.

What’s unique about the brewing process at Adelbert’s is their focus on Belgian styles, as well as their choice to use decoction mashing. Decoction is essentially pulling part of the mash out, putting it in another kettle, boiling it for a while, and then mixing it back in. It was originally an old-world technique that was developed to avoid taxes, but it turned out to have a positive flavor impact too. This method extracts a more complex flavor from the grains while also adding extra malt flavor to the beer. They also use Bohemian old-world floor malted barley, low alpha Noble Czech hops, and fresh yeast propagated at the brewery. 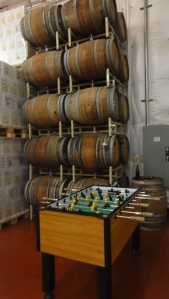 While talking with head brewer, Taylor Ziebarth, we got to taste some of their beers like the Flyin’ Monks Belgian Quad and the Philosophizer Saison. Both of these tasty brews were quite impressive and easy to drink. Their full selection contains around 6 or 7 more beers, and expands even more through their Vintage Series.

Adelbert’s is also currently brewing and bottling I Think She Hung the Moon for Naughty Brewing and Gypsy for Christine Celis LLC. The taproom has happy hours Wed & Thurs from 5pm – 8pm, and is open Fri 5pm – 8pm and Sat 1pm – 4pm. Very big thank you goes out to the GM, Sarah Zomper, for lending us her time and in-depth knowledge about the brewery.

One thought on “#8 – Adelbert’s Brewery in Austin, TX”