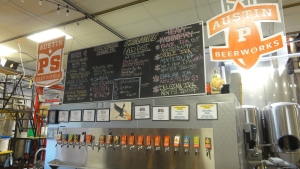 On 1/7/14 we made a trip to visit Austin Beerworks, located in a warehouse in north Austin. There were four founders involved in opening this brewery in 2011, all from different backgrounds around the country, but they came together through a passion for craft beer and a common association with current cellar master, Adam DeBower. Head brewer Will Golden previously worked at Maryland’s Flying Dog, among other ventures, and brings additional craft beer expertise to the group. Mike McGovern and Michael Graham handle the business and sales side of the operation. Michael Graham was available that afternoon and took time out of his busy day to speak with us about the brewery, which has already undergone multiple expansions in production. 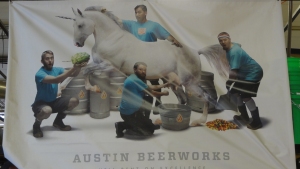 Austin Beerworks currently offers four year-round craft beers in cans, two lagers and two ales. Michael explained that they wanted bold and clean beers that finish dry in order to be refreshing in the Texas heat, choosing styles that they personally enjoyed while out at bars. “If you finish a beer and want another one, that’s a great beer – that’s kind of our ultimate litmus test.” Fire Eagle American IPA (Screeeee!) is by far the most hop forward, clocking in at 70 IBU, but is still very balanced and sessionable. Peacemaker Extra Pale Ale (extra pale referencing the color) won Silver at GABF in 2011, is referenced as their ‘gateway beer,’ but is expected to be re-branded in the near future. Black Thunder, a German Schwarz beer, also won a gold medal at GABF this past October. Not bad for a brand new brewery. Finally, Pearl Snap is a refreshing German Pilsner with an extra hop kick. 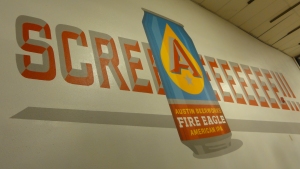 The design on the cans is simple and matches the beer styles with vibrant, bold colors. The brewery partnered with local firm, Helms Workshop, and the six packs definitely stand out on shelves. Michael advised that cans are “better for beer, better for the environment, better for the consumer.” They are even better for shipping efficiency since they take up less space. The only down side is minimum requirements for ordering can designs which equate to about 200 barrels of beer to fill an order, making smaller batch seasonal and special releases more difficult. This led to Heavy Machinery, a series of new IPAs offered every two months that was packaged in the same 4-pack of 16oz cans with a different box. The styles available in 2013 were Black IPA, Double IPA, Half IPA, Wet-hop IPA, Belgian IPA, and English IPA.

While touring the facilities, we were fortunate enough to try a sample of the Sputnik imperial stout (also available on Nitro) and a wine barrel-aged Belgian ale named Genuine Pyrite. The employees were hard at work that day canning and making deliveries. Michael Graham explained that the company enjoys having a direct relationship with their accounts and self distributes with seven vans, primarily within a 15 mile radius of the brewery. Another employee, Rob, was working on packing up freshly canned 6-packs of their Pearl Snap and kindly offered a taste. There is nothing quite like a beer fresh off the canning line.

The tap room has a variety of rotators and hours are Thurs-Fri 5-9pm and Sat-Sun 1-6pm. $10 gets you a pint glass and 3 fills. Come in and enjoy the beer, people, and some truly unique brewery artwork. Thank you to Michael Graham for speaking with us and to the other employees for their hospitality.