Yesterday we visited our 14th brewery here in San Antonio, TX which put us ahead of schedule, however we are behind on the website updates so we took the day off. Being able to say that not going to a brewery counts as a day off is pretty much the greatest thing ever.

Back in Austin we were able to hang out with some good friends. First we went over to visit with our friend Mat, whom I’ve known almost my entire life. Unfortunately his wife Krystine was working the night shift at the Hospital, but we still had good times cooking up pork chops and watching Sons of Anarchy while talking about life and stuff. The next day we met up with another friend of ours, Marion, at the South Austin location of Trudy’s; a pretty cool Tex-Mex restaurant that I try to make it to every time I’m in Austin. After we were finished with dinner there, we were joined by my other friends, Cat and Rachel, and Brandon’s friend from College, Coleman, over at Red’s Porch for some drinks. I first met Cat and Rachel when I was living down in Austin, so it was definitely good catching up with them.

[Left to Right: Top – Haggis, Tiffany, Kyle, and Me; Bottom – Ethan and Kalen]

We were chilling the whole time in Austin with our awesome friends that I also originally met while living there, Kyle, Tiffany, and kids Ethan and Kalen, and they could not have been better hosts; to say that I’m thankful for their generosity is an understatement. We were quite spoiled by everyone in Austin, so it definitely helped me adjust to being away from home. Did I mention they have a freaking disc golf basket in their back yard!? 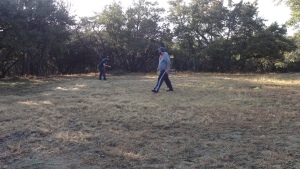 We are now staying with another good friend in San Antonio, Eric. Eric also went to High School with Haggis and I (Haggis is Brandon’s nickname by the way). Between the homemade venison burgers with fried egg on them, breakfast tacos, football on TV, deep conversations, and endless supply of coffee, I have to again say that we aren’t exactly roughing it. The three of us went to check out Ranger Creek Brewing & Distilling, where my friends, Hayley, Connor, Ryan, and Danielle, from Dallas met up with us. They were in town to see a monster truck rally, but due to our tight budget we were not able to join them.

Tomorrow we are going to 2 more breweries and then heading out to Houston for a couple of days. While in Houston we will be staying with Sarah, a girl I’ve known since I was about 5 years old. I’m looking forward to checking out what Houston has to offer while catching up with Sarah, since I’ve only seen her once in the last 20ish years. From there we will finally be leaving Texas and heading over to New Orleans to stay with my younger sister Jenny and her husband John. It’s pretty much impossible to not have fun a) in New Orleans, and b) with Jenny & John, so I’m pretty freaking excited! 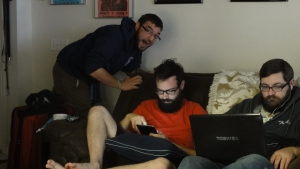 [Sneak attack photo of me, Eric, and Haggis]