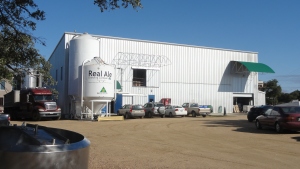 The tenth brewery on our year-long conquest was to Real Ale Brewing Company (RABC) in the small town of Blanco, TX. By far the largest brewery we have visited so far, this bottling, canning, kegging, and barrel-aging brewery in the hill country of Texas made around 53,000 barrels of beer last year. Brewmaster and Woodmaster General Erik Ogershok gave us an in-depth tour of the brewery and told us that a lot of their equipment came from other breweries like Harpoon, Boulevard, Vancouver Island, Pearl, Lone Star, New Belgium, Green Flash, and Unibroue. 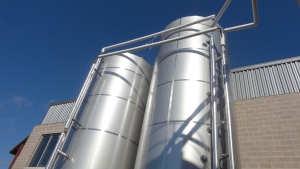 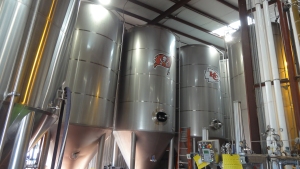 Real Ale was founded by Philip, Diane, and Charles Conner in 1996 in the basement of an antique shop in downtown Blanco, where they brewed the original three recipes – Brewhouse Brown Ale, Full Moon Pale Rye Ale, and Rio Blanco Pale Ale. Two years later, the owners decided to sell their company to a big fan of the brewery (who was also a volunteer) named Brad Farbstein, and he still owns RABC today. Their production was ramped up quite a bit after moving to a much larger facility about 8 years ago and it now takes them a little over a day to make the same amount they used to brew in a year. Regardless of that jump in capacity and continuing growth, their beer is still only distributed in Texas and they have no intention of sending it out of the state anytime soon. 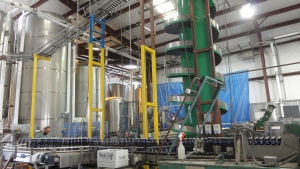 There is a wide selection of unfiltered and unpasteurized beer at Real Ale, including their year-round offerings, Seasonal brews, barrel-aged beers under the Mysterium Verum tag, and a series of brewing projects they consider their “Research & Development” program called Brewer’s Cut. The Mysterium Verum (MV) series began about 4 or 5 years ago as an experiment with 4 used wine barrels and 8 used bourbon barrels, but has since expanded to a 130-barrel cellar and continues to grow. They’ve also released wild beers through MV including Imperium, Benedictum, and Scots Gone Wild. Not only that, we were told that a couple more are almost ready to hit the market. With the unnamed beers in the Brewer’s Cut Beer Series like the Imperial Red Ale, RABC hopes to test out certain recipes and then review the feedback to see whether or not the beer should be released as a part of their seasonal or year-round lineup. 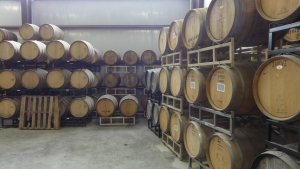 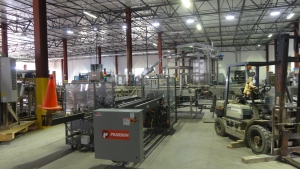 Amongst the growth and construction going on in almost every single area of RABC, they are building a new tasting room that will be quite a bit larger than the one they have right now. The current tasting room is open Fridays 2 – 5pm with tours starting at 3 and 4pm, so if you find yourself near Blanco make sure to swing by and check out what they have going on. Big thanks goes out to Erik for showing us around and answering our questions, as well as Director of Brewing operations Tim Schwartz for taking time out of his day to say hi to us. 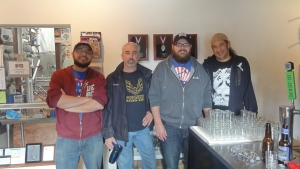