Back in San Antonio, we left our friend Eric’s apartment and went to visit with my Aunt Stacy, Uncle Tom, and two cousins, David and Sam, for a couple of days. They cooked us a steak dinner the first night, made spaghetti tacos the second night (which are awesome, btw), and gave us ice cream and brownies after both meals. Clearly we were spoiled yet again. At the dinner table my cousin David threw out some random questions like “Do you think Judge Judy is sexy?” and “If my mom and dad were about to fall off a cliff, but you could only save one, who would you save?” We chose the route of not answering the second question.

After that we headed over to Houston where we stayed with Sarah, a girl I knew back in elementary & middle school, but had only seen once in the past 15 years or so. She showed us around the Houston area for two days, including taking us out to The Petrol Station one night where we had some good times talking with her and a few of her friends. The 3 of us sang “I Come from the Water” and “Backslider” by the Toadies at the top of our lungs on the way home that night… 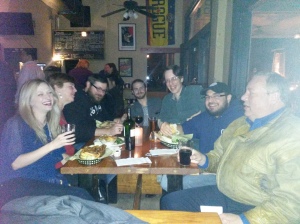 Also while in Houston, Haggis and I got to check out a food truck called Tacos Tierra Caliente, where I had an unfathomably delicious barbacoa quesadilla. I’m almost positive time slowed down when I was eating it, and can only assume the sounds and faces I was making made Haggis uncomfortable. Later on we drove out to the country to visit with Haggis’s friend from College, Brandon, and his girlfriend, Katie. We shot a few cans with a BB gun, pet his horses, and sat around chilling and talking for a while. It was definitely calming to be out in the middle of nowhere for a few hours.

We ended up staying the last night in the Houston area with a family neither of us had ever met before. The mother, Pam, was Brandon’s mom’s roommate back in college, and her youngest daughter and husband were there as well. They were incredibly nice, welcoming, and made us chicken fajitas for dinner, but unfortunately we didn’t have much time there before we had to head out to Louisiana early the next morning. 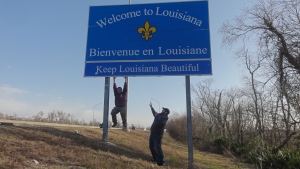 We’re now staying with my little sister, Jenny, and her husband, John, in a two-story quadplex in the Uptown area of New Orleans. After eating lunch at Guy’s Po-boys yesterday, we all drove out to Abita Brewing across the Lake Pontchartrain Causeway and enjoyed some free beers. When we got back, they introduced me to fried oysters which I had never had before. The next leg of our trip will be into unknown territory for us; not only have I never been east of Louisiana, neither of us have family out this way so it’s making me a little bit nervous. But I’m also excited to get outside of my comfort zone. Time to get back to work, now…

Note: These ‘thoughts’ blogs are meant to be informal, so pardon any grammatical issues or name-dropping