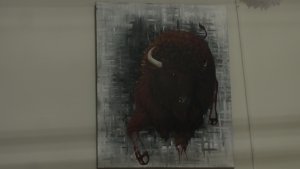 After our tour of 8th Wonder Brewery we snagged a quick lunch (per recommendation) at the Tacos Tierra Caliente food truck. Next, we made our way to Buffalo Bayou Brewing Company, located just off of I-10, west of downtown Houston. While there, we chatted with founding brewer Ryan Robertson in the taproom over some of Buffalo Bayou’s imaginative brews.

The brewery began production in January 2012 and is actually celebrating two years of success with their 2nd Birthday Buff Brewpalooza today, 1/25, from 5-8pm. Unfortunately, the event is already sold out but those privileged enough to attend can enjoy their choice from 30 unique beers in a special glass along with live music and food offerings. With demand for their products growing – Buff Brew has over 100 accounts just within the Houston loop and has begun expanding north to the Austin and Dallas markets – they added a 40 bbl and two 20 bbl fermenters last year and brewed around 2,000 bbl in 2013, up from approximately 750 bbl in 2012. They currently have 11 employees and are self-distributed. While beginning in draft only, about a year into production they began bottling by hand and are able to package about 20 bbl of bombers in 2-3 days.

Rassul Zarinfar, the brewery’s founder and CEO, attended local Rice University, got his MBA from Harvard, and had been working with a large beer distributor where he quickly worked his way up to business analyst. He found brewer Ryan Robertson, who had years of brewing experience at an independent chain in Florida and at Uncle Bucks in Grapevine, TX, through an industry site and decided he would be a good fit for the brewery who places a large emphasis on pairing with local businesses – almost all of the beers involve some sort of collaboration. Buffalo Bayou has two year round beers as part of their Heritage Series, 1836 ‘copper ale’ and More Cowbell imperial IPA, but focuses on experimental beers that defy style guidelines through their Secessionist Series. 1836 is an homage to Houston which was founded in 1836 on the banks of the Buffalo Bayou and more Cowbell was developed in a collaboration with the United States Bartenders’ Guild (USBG).

Ryan shared that they purposefully chose the smaller 10 bbl brewhouse so that they could be creative and do experimental batches without too much risk. Perhaps the most popular of the Secessionist Series, and the first one made, is the Gingerbread stout. Continuing the local collaborative trend, Smoke on the Bayou Scotch ale was made with the idea for a beer that could only be made in Houston. BuffBrew partnered with Beavers, Rockwell Tavern and Grill in Cypress, and Goode Co. who all smoked malts on different woods at their facilities. Red Velvet cherry chocolate milk stout was made to pair with a local pastry chef’s red velvet – black forest fusion. Another really interesting concept was to create a Belgian golden strong ale without any Belgian ingredients. The recipe utilized 2-row malts, Crystal hops, American ale yeast, clover and wildflower honey, white peppercorn, and elderflower. The creation was dubbed Sick in the Head and was made in honor of a Specs beer department manager, Joey, who is in remission from brain cancer and came up with the deconstructed beer idea. $3 from each bottle sold was donated to cancer research.

The brewery currently has a fledgling barrel aging program and some of the beers will likely make an appearance at today’s 2 year anniversary bash. Ryan discussed a whiskey barrel aged Gingerbread stout and Smoke on the Bayou. In addition, Wit X-mas is currently aging in wine barrels with lactobacillus. The Wit X-mas was done in cooperation with Apogee homebrewers group and the brewery scaled up their recipe for a Belgian Wit with allspice, nutmeg, cinnamon, and vanilla bean.

They are open every Saturday from 12-3pm for tours. Definitely stop by to check out Buffalo Bayou’s style shattering beers. Big thanks to Ryan for telling us the story behind all of the beers and showing us around the brewery and to Rassul for taking the time to stop by and say hi. 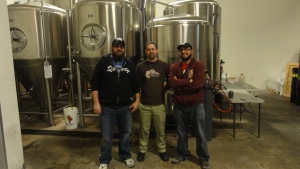