Our second brewery visit on Friday, 1/17/14, was to Tin Roof Brewing Co in Baton Rouge, Louisiana, located just a few miles away from LSU (Louisiana State University). Normally the brewery is open for tours on Fridays, but construction crews were up there working hard on some new installments, so the brew master, Tom Daigrepont, and his son Alex, the head brewer, kindly met us up there to give us a personal tour of the facilities. 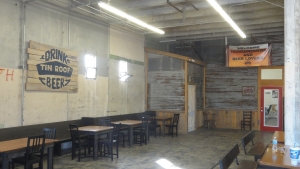 Tin Roof began producing beer for commercial consumption in November of 2010, after several years of hard work and planning. The owners, Charles Caldwell and William McGehee, were originally childhood friends and after a stint of Caldwell working as a banker and McGehee testing out the waters as a lawyer, the two decided it was time to shake up their lives a little bit and open up a brewery. Starting with two fermenters, two bright tanks, and a 30bbl brewhouse, Tin Roof was able to produce around 3 to 4 batches per month. Once more fermenters were added, they increased to 3 batches per week. Now, with a new brewhouse and additional equipment throughout their warehouse along with a “Brew Krewe” of 9, they are able to easily do 2 batches per day.

The first couple of beers to be released were the Voodoo Bengal Pale Ale and Perfect Tin Amber. Tom was brought on about a month later in December of 2010 and quickly tweaked those original recipes into what you will find around Louisiana and parts of south Mississippi today. Then came the Tin Roof Blonde – originally intended to be the official beer of LSU under the name ‘Bandit Blonde,’ Tin Roof Brewing Co offered internships to some of LSU’s food science students. Even though all the spent grain is still donated to the school’s dairy farm and they are still open to offering internships, the partnership for the Bandit Blonde was placed on hiatus after the administration at the University decided it may be a bad idea to have a beer affiliated with the school. The beer is still rocking a purple and yellow colored can, even though the school’s decision was completely understandable. 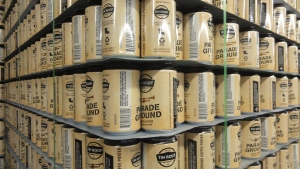 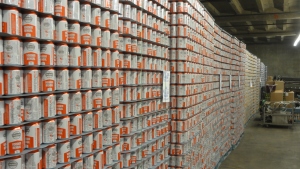 Tom has more of a classic, scientific method and his son Alex has more of an out-of-the-box, artistic approach, which the two bring together to give each of the beers the harmony they deserve. Alex compared their combined styles of brewing to a hamburger – a burger can have a bunch of crazy stuff on it like bacon, jalapenos, and peanut butter, but won’t truly be a great burger unless the meat itself is great, too. That is where the seasonals come in to play. With beers like the Not Too Sweet Watermelon Wheat in the summertime, Parade Ground Coffee Porter in the fall, and Juke Joint IPA in the spring, Tom and Alex are able to show off their ability to bring together a good burger with perfectly paired toppings. They are also looking to develop a barrel-aging program more throughout 2014 as well as working on other new recipes they hope to put out this year. 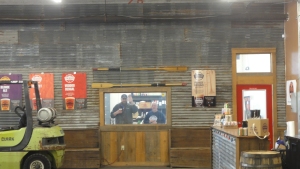 If you’re looking for something fun and inexpensive to do in Baton Rouge on a Friday evening, go check out Tin Roof’s $5 tours from 5 – 7pm. Also keep an eye out for special events, like the charity event they held to help out Cancer Services where around 600 people came to show support. Big thanks to Tom, Alex, a cutout of Kenny Powers, and Spider-man for spending time with us on their loud construction day!