We finished out our trek through the state of Louisiana on Monday, 1/20/14, with a visit to NOLA (New Orleans Lager & Ale), located in the Irish Channel right next to the Mississippi River. Kenzie Oescher, their VP of marketing and sales, told us that although ‘lager’ is in the name they don’t actually brew any lagers. However, she went on to tell us that they are working on some recipes for a pale lager right now. 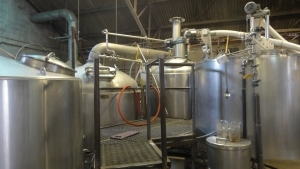 NOLA started in 2008 after the CEO, Kirk Coco, realized there were no breweries located in his home town of New Orleans. He had spent some time in the Navy where he used to drink Dixie beer under the impression that it was helping his local economy back home, but after the realization that Dixie had moved their operations to Milwaukee, he came up with the idea of opening NOLA. Soon after making his decision he met Peter Caddoo, the Brewmaster, who actually used to brew for Dixie before the New Orleans location went down just before hurricane Katrina. Speaking of hurricanes, NOLA’s warehouse was hit by Isaac, but luckily their warehouse used to be a WWII hangar & storage unit which was built very well. They didn’t lose any power or beer (thank God!), but there was damage to their offices and taproom so those had to be rebuilt.

Currently NOLA brews can be found in all of Louisiana, Alabama, Mississippi, and the panhandle of Florida, and will be expanding to other areas of Florida soon. They’re distributed in cans based on a multitude of reasons, including the fact that the city of New Orleans does not recycle glass and the brewery does everything in their power to be as green, environmentally friendly, and sustainable as they can. They also do a lot of charity work, like Hogs for the Cause – a big BBQ competition and music festival that raises money for pediatric brain cancer. An annual Easter Keg Hunt is also held to help the Gulf Restoration Network, who does a lot of the gulf cleanup.

As for the beers you are able to find from NOLA, there is a plethora of different choices to pick from including five different year-round offerings. The first beer they produced back in March of 2009 was the NOLA Blonde, which is the most popular and widely distributed beer. Next came one of the brewery’s favorites – an English Mild known as NOLA Brown, which unlike a lot of other brown ales, is very good in the summertime and pairs well with the spicy foods often eaten around New Orleans. A West Coast style IPA named Hopitoulas became their third addition, and is named after the street that the brewery resides on, Tchoupitoulas. The next two brews were at one point seasonal, but after their popularity gained momentum, they were switched over to being year-round. 7th Street Wheat was the first of those two and was named in honor of the 7th Street wharf across the street from the brewery, however it is still considered quazi-seasonal since it uses fresh lemon basil which isn’t available during cold weather. Most recently their Irish Channel Stout transitioned to a full-time position; it was named after the neighborhood in which they reside.

One of the more popular seasonal/ specialty brews in their repertoire is a double IPA called Mechahopzilla, however that name is subject to change due to the fact that Toho, a Japanese company and creator of the Godzilla Empire, is attempting to sue NOLA based on the similarity to Mechagodzilla. Thankfully, if the suit goes anywhere it will only effect the name of the beer, and the recipe will continue to be made under a different tag. Amongst many other beers in NOLA’s collection is a fall seasonal named after the steam engine that ran on the second oldest railroad in the United States, Smoky Mary, which is made using pecan wood indigenous to the area as well as a munich malt they smoke in-house on a smoker they built. They have also done some collaborations, including Swamp Grape Escape and Blackstrap Chicory Milk Stout with New Belgium out of Ft. Collins, CO, as well as Pour Me Something Mistah with Stone out of San Diego, CA. Furthermore, NOLA had the first cask edition ale in New Orleans since prohibition, and also has a barrel-aging program that utilizes barrels from Old New Orleans Rum, the oldest rum distillery in the country.

Every day except for Tuesday you can go to the new taproom to enjoy their usual selection alongside small-batch beers not found outside the brewery from 2pm – 11pm on weekdays and 11am – 1130pm on Saturday & Sunday; Friday from 2-3pm there is a free tour. Big thanks to Kenzie for showing us around, and thanks to Lauren in the taproom for putting up with us as well!