We woke up the chilly morning of January 26th and said goodbye to Alabama (for now). At the western edge of the Florida panhandle lies the city of Pensacola where we spent the afternoon relaxing with the good people at Pensacola Bay Brewery. The brewery is located right across the street from the water in the quaint Historic Pensacola Village which is managed by the state’s West Florida Historic Preservation, Inc. When we arrived, we sat at the bar and sampled their eight beer flight, then Mark Robertson, co-owner and head brewer, showed us around the brewery. As the day warmed up, we enjoyed some time writing outside in the sunlight and watching the brewery get increasingly busy. They are not able to sell food but cultivate a tight sense of community by periodically offering free food with the help of brewery friend, Chef Dan Dunn, who was busy whipping up several dozen sliders and a few bags of fresh and grilled oysters with the help of several other locals.

Mark said that he was hooked on craft beer after returning from Germany and following a visit to Milwaukee, WI. He began homebrewing in 1985 and quickly tore through Charlie Papazian’s infamous book, The Complete Joy of Home Brewing. After meeting co-founder Elliott Eckland through a local homebrewing club, they started planning the brewery in June of 2009. Pensacola Bay Brewery opened in November of 2010 with four 15 bbl fermenters and four 15 bbl bright tanks. Within six months they began expanding and currently brew an average of 60 bbl per week on a 15 bbl system in congruence with 180 bbl of fermentation and 105 bbl of conditioning space. Mark, along with only two other back house employees, pumped out about 2,300 bbl in the past year. However, Mark believes the production can increase significantly in the future as storage space is opened up through usage of the new bottling line. 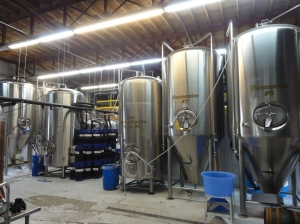 They offer an ambitious 8 beers poured year-round in the tap room and ramp up options with seasonals and special batches. There were a total of 15 beers on tap during our visit but Mark said that was a little more than usual. The best selling year-round is the Riptide Amber which, along with the Sawgrass Wheat, Li’l Napoleon IPA, and Lighthouse Porter, is available in 22 oz bottles for off-site distribution. Those bombers are bottled by hand with a 4 Blichmann gun system which takes about 5 hours to bottle, label and package 60 cases. However, the brewery has a new bottling line which will package 12oz bottles of the amber, IPA, and porter for market. The remainder of the year round beers are the Banyon Brown, Deluna Kolsch, Blackbeard Stout, and Desoto Berliner Weiss Ale with raspberries. A small barrel aging program has been implemented and is currently only available in kegs. The most prevalent of these releases is the whiskey barrel-aged Black Treasure Porter. 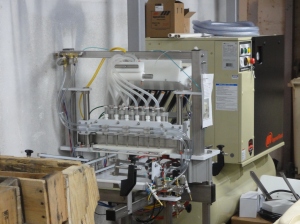 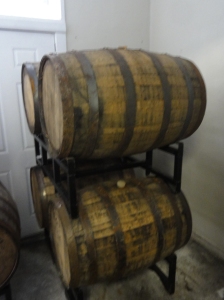 The brewery has partnered with a variety of charities including the Special Olympics, Big Brothers Big Sisters, and the Wildlife Sanctuary of Northwest Florida. In addition, the military, firefighters, and law enforcement get a generous 25% off their tab at all times. This past November they participated in the Emerald Coast Beard & Moustache Alliance’s Moustache Ride, a bicycle pub crawl to support Movember where proceeds went to prostate and testicular cancer research. The grain from each brew day is saved in trash bins for weekly collection by a local farmer who feeds it to his Angus cows.

Brewery tours are offered each Saturday at 3:30pm and last as long as patrons have questions following Mark’s spiel. The $5 cost can then be redeemed for a pint of cold Pensacola Bay brew or taken off the price of any merchandise. We definitely recommend a visit while in town to check out the nice taproom and fill up a growler. Of note, Florida law only allows growler fills of up to 32oz or over a gallon (nothing in between). Who knows, you may luck out like we did and find yourself there on a day with some live music or a party on the patio along with some delicious food. Thank you to Mark for showing us such a great time in Pensacola. 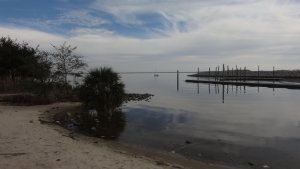 One thought on “#29 – Pensacola Bay Brewery in Pensacola, FL”