While we were back in Fairhope, AL, we ran into Shank and Tyler who are brewers at Grayton Beer Company in Santa Rosa Beach, FL. After speaking with them and enjoying a few beers, we decided to add Grayton to our list and spontaneously ventured over there on Monday, 1/27/14. Shank is the head brewer and has been with Grayton for 3 years, although most of that time Grayton Beer Company was contract brewing through Florida Beer Co, who at the time was in Melbourne, FL southeast of Orlando. Grayton’s new facility boasts an impressive 30,000 sq ft, although two separate 3,000 sq ft areas are being leased out right now, so they are using about 24,000 to house their 30bbl brewhouse, four 90bbl tanks, three 60bbl, and two 30bbl, along with a remarkable bottling line that has a 20 head system and is able to push through about 100 bottles per minute. 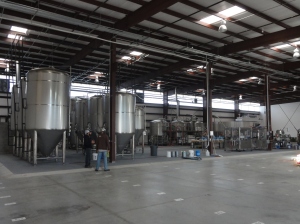 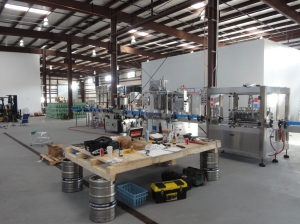 Haggis and I were lucky to be there on the first day Grayton Beer Co was bottling in their new facility. It had been about 9 months since the last time they produced beer through contract brewing and about 2 months since their beer was completely off the market. During this gap, the employees at Grayton have been working hard to re-brand themselves in a way that people in the area will quickly be able to recognize that the beers are local to them near scenic highway 30 A. Jamey Price is the president at the brewery and realized that craft beer isn’t quite a booming market in their area yet, so he made the decision to make their first 5 beers accessible across the board.

Grayton Pale Ale is the only one will be making the jump from contract brew to full production. This recipe was hard to nail down, since the brewers could not actually go to the other facility to adjust. Instead, they had to wait for it to come out, taste it, figure out what needed changing, relay that message to Florida Beer Co, then wait for it to come out again. Shank says it took about 5 batches before he was really happy with the recipe, and now gives credit to this beer for getting them to where they are today. Under contract brewing they also had an IPA, but have decided to steer away from this version and plan on coming up with a new, better recipe to release in the future. 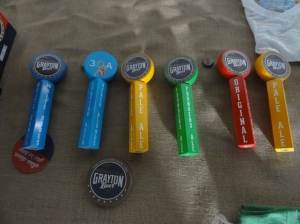 Alongside the Pale Ale will be four other beers. An American-style Kolsch tagged The Original is one of those beers, and it is crisp, clear, and packs a decent amount of bitterness to it. Coming in at 4.3%, this beer uses a Zythos Hop Blend giving it a funky northwest hop feel to it. Next is an amber that will be known as 1890 Founders Ale – an ode to Shank’s favorite beer, Bell’s Amber – with 1890 referring to the year Grayton Beach really began (you can read about that history here). There will also be a Belgian-style Wit beer named White Dunes that uses bitter orange peel & coriander with a wit yeast to provide a nice & cloudy, yet easy drinking experience. Finally, Grayton collaborated with www.30A.com to make the 30 A Beach Blonde. It comes in at 4.6% but is the lightest of the 5, with a little bit of malt sweetness and a low, subtle hop character to balance it. 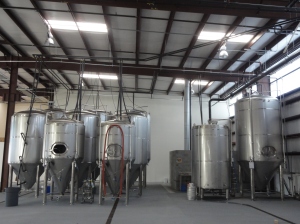 Just a few weeks before we visited, Grayton sponsored the 30A Song Writers Festival in South Walton, which is a singer/ songwriter music festival that benefits the Cultural Arts Alliance (CAA) – a local alliance that helps all things art related. Grayton Beer Co’s main focuses are to be fresh and local, so they plan to have a tasting room with live music at the brewery in the not-too-far future. Their goal is to produce 6,000bbl in 2014, so although you can’t visit the brewery quite yet, be sure to keep your eyes open for their beers hitting the shelves! Huge thanks to Shank and Tyler for showing us around on their busy first bottling day!