Our last brewery visit in the month of January was a big one. We were fortunate enough spend an afternoon at Cigar City Brewing, where we met with Vice President Justin Clark and were soon joined by owner and founder Joey Redner. The brewery’s name is a nod to local Ybor City, once the Cigar Capital of the World, although they are quick to point out that the brewery is not actually located in Ybor City. Several years before opening, Joey developed a business plan for a craft brewery and was writing a craft beer column for a local paper but, after losing patience waiting for someone else to utilize the plan he had developed, he decided to take on the challenge himself and founded Cigar City Brewing (CCB). 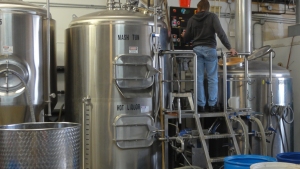 CCB sold their first beer in March of 2009, operating out of a 6,600 sq. ft. warehouse with a 15 bbl, two vessel brewpub system accompanied by six 15 bbl fermenters. After several years of rapid growth, it now serves as the pilot/small batch system and they have expanded throughout the property to a total of 24,000 sq. ft, and upgraded to a 4 vessel, 30bbl brewhouse which is surrounded by a forest of 120 bbl fermenters. They brew 24 hours a day, 6 days a week with a rotating shift schedule and have grown at an astounding rate from less than 1,000 bbl the first year to packaging 27,000 bbl in 2013 – plenty more was produced but is currently in limbo with the extensive and popular barrel aging program. Projections for 2014 are over 50,000 bbl, not including additional capacity through the Cigar City Brewpub which features Tampa-style Cuban cuisine and opened for business on April 1, 2013. Also on the docket for CCB this year is opening up the new Cigar City Cider and Mead facilities in Ybor City under the helm of co-founder Todd Strauss whom kindly chatted with us while in the taproom. 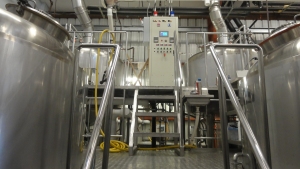 The brewery is focused on an appreciation for Tampa history and creating a local Tampa flavor that is culinary inspired. With that goal in mind, Wayne Wambles – formerly of Buckhead Brewery & Grill then Foothills Brewery – was hired as head brewer. While limited distribution is available in AL, GA, VA, NY and Philadelphia, the company has remained true to their stated goals in being a Tampa oriented brewery. CCB is very dedicated to satisfying the local Florida demand before spreading out too far across the Southwest. In less than 5 years they have released several hundred different beers, due in part to their focus on experimentation and having fun with what they brew. Joey explained that there are two employees whose sole job is to tweak base recipes or apply variable treatment in the taproom and continued, “It is something that I think is important to who we are – it’s just in our DNA.” 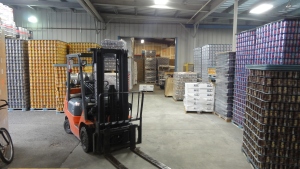 In 2014, seven of the core beers will be available year-round in six packs of cans which will be fed through their new canning line at a projected 170 cans/min. The packaging facility is currently under construction to install drains for the new line. Jai Alai IPA is characterized by tropical fruit and citrus in the aroma and is named after the Basque-originated game that used to have some presence in the Tampa area. Named after the popular cigar wrapper, Maduro Brown Ale is brewed with flaked oats and boasts a higher ABV than traditional English-style brown ales with notes of espresso, toffee and caramel. Tocobaga Red Ale is an homage to the Native American tribe that occupied the area before the arrival of the Spanish (and their diseases) in the 1500’s. Florida Cracker White Ale, the only mainstay beer not sent through the brewery’s centrifuge to remove particulates, is termed after a breed of horses left by the Spanish. Invasion is an American-style Pale Ale that also features a strong citrus fruit presence from the hops. Hotter Than Hellesfeatures a strong malt backbone and the floral Hallertau Mittelfruh hops. The Dry-Hopped on the High Seas Carribean Style IPA release represents a truly innovative approach. The beer is brewed in Ponce, Puerto Rico at Cervezas del Sur then transported to Cigar City in 200bbl pressurized and refrigerated shipping containers where it is then canned. During the approximately 4 day voyage to port in Jacksonville, the beer is dry hopped with varying hops – previous releases have included Citra, Ahtanum, Simcoe, and, most recently, experimental hops #529 – the movement of the ocean accelerating the efficiency of dry hopping as compared with an idle tank. It also helps boost production capacity with the beer not occupying tank space at the brewery.

Another unique process utilized at the brewery is the circulation of beers through a repurposed, single-walled grundy tank that imparts flavors from adjuncts. The process is much faster than standard practices due to the consistent circulation over adjuncts and also makes for much easier cleanup. The grundy was utilized for their Southern Slice collaboration with Terrapin, circulating the base beer over pecans. Speaking of collaborations, Cigar City has certainly taken to them and has, in addition to Terrapin, partnered with heavy hitters the likes of Ecliptic, The Bruery, De Proef, Green Flash, Widmer Brothers, Mikkeller, B. Nektar, New Belgium, Alesmith, and more.

Selected special releases are typically made available in bottles. The current mono block filler can be adjusted to accommodate 12oz, 22oz, and 750mL bottles, coinciding with the size of the starwheel. The line also contains a glass etcher to date each bottle for quality assurance. A variety of seasonal beers accompany different brewery specific series, such as the Humidor Series, which features beers aged on Spanish cedar (the wood used to make cigar boxes), or the Torcedores Series, where individual brewers are encouraged to design and brew their own recipes. Also creating some buzz is the 5 Beers for 5 Years release which celebrates the upcoming 5 year anniversary in March of 2014. To make up for not releasing any anniversary related beers in the past, each brewery department – Packaging, Brewing, Cellar, Tasting Room, and Brewery Reps & Administration – will create their own special beer to be released simultaneously in early March. As mentioned previously, there is a wide-ranging list of Cigar City creations but I can’t skip over Hunahpu’s Imperial Stout – aged on cacao nibs, Madagascar vanilla beans, cinnamon, Ancho and Pasilla chilies – which is accompanied with its own release party at the brewery the second weekend of every March. Hunahpu’s Day had a record 9,000 attendees last year but the 2014 event has been capped at 3,500 for safety reasons. 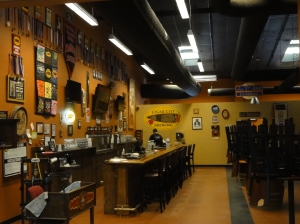 Since it’s opening in 2009, Cigar City has been widely decorated with local and national medals that are on display in the brewery’s tasting room. The taproom was originally opened in 2010 but, after constantly being packed with patrons, was expanded about a year ago into approximately three times the space and is now occupied by two long bars (one for retail purchases and growler fills, the other for on-site sampling), a gift shop, tons of room for seating, a shuffleboard table, and even an authentic cigar rolling station. No trip to the Tampa Bay area would be complete without a visit to the Cigar City Brewing tasting room which is conveniently open 7 days a week, Sun-Thu 11am-11pm and Fri-Sat 11am-1am. Thank you very much to Justin for agreeing to meet with us and to both he and Joey for their hospitality in showing us around the new facilities and sharing their story. 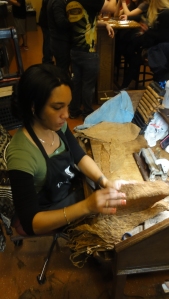