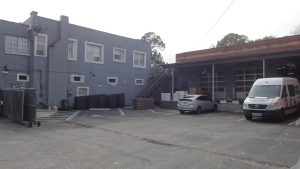 Our first stop in the sprawling metropolis of Jacksonville, FL was to Intuition Ale Works (IAW), conveniently located just west of downtown in the growing Riverside neighborhood. Our timing was fortuitous, just one day after the release of their popular Underdark, an Imperial Stout aged in oak barrels. The previous day they had hosted a release party at the brewery and were uncharacteristically open for a few hours on Sunday to allow the locals to fill up growlers for the Super Bowl that evening. Intuition Ale Works was established by Founder and Brewer Ben Davis and just celebrated their 3 year anniversary this past November. Ben is a Jacksonville native but spent several years in the Sonoma, CA wine industry before moving home with his family. He then attended the Siebel Institute and spent over two years perfecting recipes in his garage before endeavoring to open the brewery in order to make Jacksonville a better city.

In their first year, Intuition produced around 1,200 bbl and has experienced steady growth through 5,000 bbl of beer brewed in year three. They operate a 10 bbl brewhouse and a variety of sizes for fermentation vessels, ranging from 10 bbl to 60 bbl. Ben is still involved in recipe generation but also encourages his gifted brewing staff – consisting of lead brewer Andrew Cattell along with Matt and Jessie – to experiment regularly and develop creative, new beers for the taproom. General Manager, Cari Sanchez-Potter, has an MA in Gastronomy and had a large hand in developing the brewery’s unique cookbook release with over 80 beer inspired recipes, Cooking with Intuition, in addition to founding the local King Street Farmer’s Market. Co-author Robin Rutenberg is IAW’s Creative Projects Coordinator and is a Certified Cicerone Beer Server along with 4 others of the taproom staff. Robin was working the afternoon of our visit and was kind enough to show us around the brewery and share her passion for Intuition’s crafted lagers and ales. 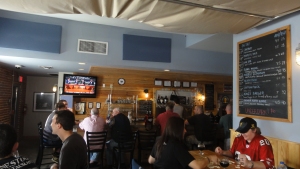 The Underdark is bottled in bombers and waxed individually by hand, however, it is the only beer sold in bottles. In 2012, Intuition became the first craft brewery in Florida to sell their beers in cans and currently distribute their core three beers in North and Central Florida. People’s Pale Ale, IAW’s flagship beer, is a West Coast pale that features bold citrus aromas from the traditional Williamette and Cascade hops and distinct bitterness provided by Magnum. Jon Boat Coastal Ale is an English-style golden ale that is meant to be enjoyed in the warm FL summers. The last of the canned offerings is the I-10 IPA, named after the highway running just north of the brewery, this West Coast IPA is brewed with a total of 4 different hops and is also dry hopped. 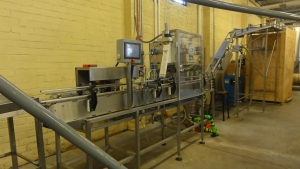 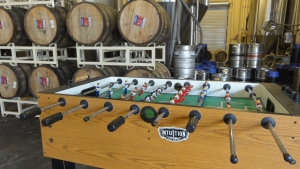 Our visit to the taproom saw a focus on Belgian beers such as Punk Monk, an imperial pumpkin Dubbel with pumpkin pie spices, and Jesse’s Girl Quadruppel. However, there was still a wide range of styles stretching from Silvertown Ale Kentucky Common to Double Elimination DIPA, crafted with 100% Centennial hops, to the Dark Star Milk Stout. For those without a penchant for the variety of higher gravity offerings, several beers were available including the Session Saison and the Fish Camp Pilsner. Also of interest, during our exploration of the brewery Robin pointed out some tequila barrels that are currently occupied with House Boat, a double version of their Jon Boat. You can take a look at the website to see what is currently on tap as well as the brewery’s extensive ‘graveyard’.

Intuition is very involved in supporting the local community and charities. Proceeds from the aforementioned cookbook go to support Second Harvest North Florida, a non-profit focused around issues of hunger. They also host yearly celebrations for Saint Patrick’s Day and a popular Oktoberfest event that benefits the Memorial Park Association. The previous two years have seen the release of a beer created and brewed solely by the ladies of Intuition where $1 of each pint was donated to Girls Rock Jacksonville, a not-for-profit, week-long day camp with the mission to empower young girls through music education. The two beers were The Eleanor, a Belgian Blonde Ale brewed with Black and Oolong teas, and Siren, a Schwartz beer made with 4 different peppers. Their website details that since opening the brewery has donated to over 100 charities and “Through our $1 per pint program, we have donated $20,000 in cash from beer sold during events.” Unfortunately, due to a history of noise complaints from nearby residential neighbors, Intuition is no longer able to host events in their outdoor brewery space.

Check out the unique beers being prepared by Intuition Ale Works by visiting their 20-tap tasting room Tues-Fri 3-11pm or Sat 1-11pm. Thanks again to Robin for showing us around the brewery and to Riley Leuthold for speaking with us while we enjoyed some flights.