Bold City started in October of 2008 by mother-and-son team, Susan and Brian Miller, and are supported by the rest of their family, along with other staff members, who all have a hand in the operations. Before opening the brewery, Brian started homebrewing back in 2002 and soon found himself in a local homebrewers club in Jacksonville. After fixating on his passion, his mother, Susan, left her job at Blue Cross Blue Shield of Florida and teamed up with Brian to found Bold City Brewery. Starting with about $250K, the family-owned operation was forced into figuring out everything on their own since they couldn’t really afford consultants or engineers. Susan also mentioned that when they were starting up she noticed that women are treated and respected just like everyone else in the beer world, and that has remained true through today. 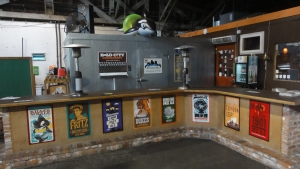 When the brewery first opened, Bold City brews were only offered in kegs. Soon after, they were able to start bottling with a used bottling line they purchased from Glacier Brewing in Montana, and recently made the transition to canning just last year using a 5-head filler line that does around 32 cans/minute. Brian has wanted to can from the beginning for multiple reasons but had to first wait for the brewery to be in a secure place before investing the significant amount needed for cans. During their first full year of production, they made around 800 barrels. Using a 3-vessel 20 bbl brewhouse, three 40bbl fermenters, a 40 bbl bright tank, and an 80 bbl bright tank named Bertha, they produced around 7,500 bbl last year. We were also informed that there isn’t really a head brewer at Bold City. Instead, brewers Cody & Jeremy swap back and forth between working in the cellar and the brewhouse. In the beginning, Brian and Cody shared these responsibilities, and these days Brian manages all brewery operations and backs up Cody and Jeremy as needed.

As of now they have 4-year round beers: Killer Whale Cream Ale, Mad Manatee IPA, Duke’s Cold Nose Brown Ale, and the 1901 Red Ale. Three of those four beers are being produced in cans, with 1901 being the exception, and all of the branding has something to do with either the family or the city of Jacksonville. For example, their best-selling beer, Duke’s Cold Nose Brown Ale, is named after Brian and his wife’s dog who used to be up at the brewery all the time. Unfortunately Duke passed away in April of 2010, but he was kind of a local celebrity up until then and even had an obituary in the Florida Times-Union. 1901 is named after the year of the great fire of Jacksonville that burned down well over half of the city. The beer is brewed with a lot of roasted barley to go along with that theme.

They also have Fritz’s Hefeweizen on sabbatical and Archie’s Rhino Rye Pale Ale in hibernation; they were at one point year-round and will be again in the future. Archie’s Rhino is named after Archie, who was the oldest white rhino to reproduce at the time. He was housed at the Jacksonville Zoo, so Bold City teamed up with the zoo for this beer and even sends a portion of the proceeds to the zoo to help out with the Rhino habitat. Fritz is Susan’s father (and clearly Brian’s grandfather) who had emigrated from Germany, so the name seemed fitting for a German Hefe. One other great story in regards to the naming of a beer has to be mentioned: Abby’s Ale. There is a local Urologist and friend of the family who comes into the brewery and, after Brian and his wife decided two was the perfect number of children and did not want any more, the wife asked the Urologist how much a vasectomy would cost. His answer? If Bold City brewed a beer and named it after his dog, it would be free. They also have other seasonal offerings, so be sure to check those out.

The taproom is open Thursday through Saturday, and tours are available most Saturdays from 2pm – 5pm. They also hold a lot of charity events in the tap room where $1 is donated from each pint sold to whoever the charity is that night; Bold City will help out almost anyone with a good cause who can prove they have a non-profit status. There is also an annual competition with a local homebrew club where the winner gets to come in and brew their recipe at the brewery. In addition, they do an anniversary party every year and a flip cup tournament held around St. Patty’s Day that you won’t want to miss out on. Big thanks again to Brian and Susan for taking time out of their days to entertain us while we were there!