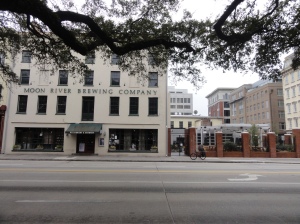 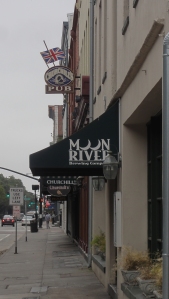 On the morning of 2/4/14, we once again packed our bags and prepared to head to Georgia after 9 (mostly cloudy and rainy) days in the Sunshine State. We crossed the border and hugged the Atlantic coast on our way to historic Savannah, GA for a tour of Moon River Brewing Company. We cozied up to the bar and sampled a flight consisting of each beer on tap that day and cured our hunger with the $5 lunch special, a chicken cordon bleu inspired sandwich with French fries. We were next greeted by the brewery’s co-owner, John Pinkerton, who started the business with Gene Beeco in 1999, well ahead of the new wave craft brewery wave in the South. 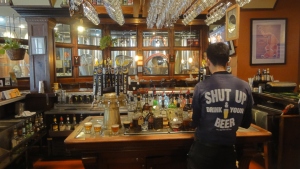 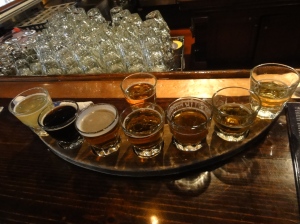 Moon River is located in the former City Hotel, Savannah’s first hotel that was built in 1821. Aside from decades as a hotel, this historic building also served as the location of the city’s first US Post Office and as a branch of the Bank of the United States. It has had a variety of uses since the hotel shut down during the Civil War, but sat empty for nearly two decades following severe damage during Hurricane David in 1979 before renovation for the brewpub that it houses today. In 2002, Savannah was labelled as America’s most haunted city by the American Institute of Parapsychology and the Moon River Brewing Co. building is thought by many to be the most haunted in the city. I can confidently assert that there were no paranormal sightings upon our visit (we are both admittedly skeptics, albeit open minded ones), however, some of the staff have their own experiences with bizarre occurrences and the brewery is featured on many of the city’s guided ghost tours as well as on paranormal TV shows, Ghost Hunters and Ghost Adventures. But enough with the history and the building, on to the real reason we came – the brewery! 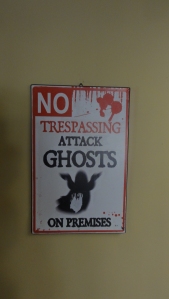 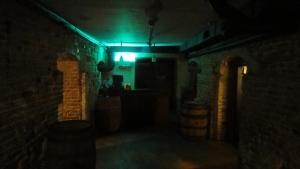 While the restaurant side of the business is handled by Gene Beeco, the motivation behind all things beer comes from brewmaster, John Pinkerton, who also helped establish the Georgia Craft Brewers Guild (GCBG) in 2010 and is currently operating as their President and Chair of the Government Affairs Committee. Guild business keeps him occupied away from the brewery often throughout the year but he has great confidence in the two men who handle the day to day brewing. John considers himself a technical, in the boots brewer, and, although he has been busy advocating for craft beer for two decades, is surprised by how embedded he has become within GCBG and Brewers Association business. However, he understands the importance of the work and is currently in the middle of a political push (House Bill 314/Senate Bill 174) to allow GA brewpubs to sell growlers and for production breweries to sell up to a case (288oz) of beer per day directly to consumers. This battle comes on the heels of a big victory in February 2012 that increased the amount a brewpub can distribute from 500 bbl to 5,000 bbl. 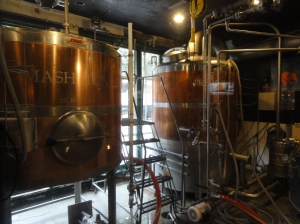 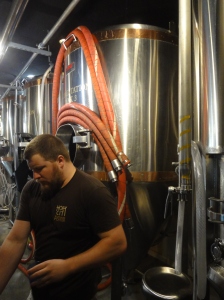 The brewing staff try to keep six beers available year round utilizing their 2 vessel, 15 bbl brewhouse and 3 fermenters – a 4th fermenter is scheduled to go on line in the near future. The mainstays are Wild Wacky Wit, Belly Washer English Golden Ale, Apparition English Pale Ale, Slo-vannah American Pale Ale, Swamp Fox IPA, and Captain’s Porter. John shared that, while he is trained more in German and continental European styles, he has become fixated on duplicating a traditional English flavor and has been utilizing an English (Timothy Taylor) yeast strain in some beers that is under-pitched and fermented warm to produce unique fruit esters. During our visit, the SuperFoxy DIPA and Nick’s Balls of Gold Belgian-American Amber Ale were also on tap. In addition, the brewery offers some seasonals like the Road Trip Hard Cider, made with fresh pressed apples (fresh, as in delivered and in the fermenter within 24 hours) from Mercier Orchards in Blue Ridge, Georgia. A rebellious fall seasonal utilizes sweet potatoes rather than pumpkins and showcases a pumpkin spice preparation for the rim (like a margarita) rather than adding the spices to the beer – although John confessed the idea came from an Oktoberfest preparation at Sweetwater Tavern in VA. 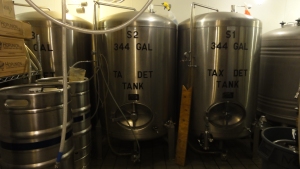 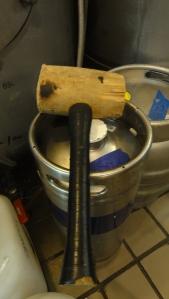 John explained that they plan to tweak the Belly Washer recipe as new hop contracts will provide access to some of the more exciting American and New Zealand hop varietals. He has also been playing around with some barrel aged beers and has several whiskey and a couple wine barrels in the basement cellar. The brewery has been producing around 1,200 bbl for the past several years and provides limited distribution in kegs to around 35-40 accounts in the Savannah area due to space limitations. Speaking of space limitations, the brewing staff has been forced to be creative without space for hot or cold liquor tanks in the brewing room. 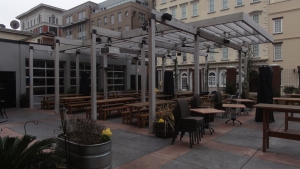 Moon River Brewing Company features a relaxing environment with a diverse offering of food ranging from pub fair to fine dining. They boast a large dining area, including a spacious 5,400 sq. ft. Beer Garden opened in March of 2013. The main space and downstairs beer cellar can be rented out for special events. John has 18 firkins with which to produce both traditional and experimental beers and the bar taps cask-conditioned ales every Wednesday. Patrons can become a lifetime member of the Quality Assurance Team for only $35 – enjoying reduced prices on beers, food specials, and invitations to private parties. In addition, every Friday they celebrate the coming of the weekend with the six o’clock toast which has formalized rules and where each patron of the bar is presented with a sample of a beer with which to participate. The brewery also takes an active interest in the local community and gives back in a variety of ways, a long list of which can be located here. Savannah’s only brewpub is open Sun – Thurs 11am-11pm and Fri-Sat 11am-midnight with happy hour specials 4-7pm every day. We definitely suggest a stop in to admire the historical atmosphere, grab a good pint of beer, some grub, and maybe even have your first encounter with the supernatural. A huge thank you goes to John Pinkerton for taking time from his important business to speak with and guide us around the facilities. 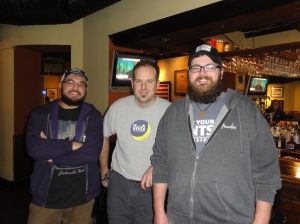