After spending the day with our awesome host, Sarah, in Savannah, GA, we headed over to Southbound Brewing Company on the night of Wednesday, 2/5/14. We had no idea what we were walking into, as we had apparently decided to show up on the grand opening night of their brewery tours. Instantly we were surrounded by patrons playing cornhole, laughing, and conversing over the drinks Southbound had on tap and cask that night. Not only that, we were also lucky enough to get to enjoy the live, local music that was being provided by The Whiskey Sessions. 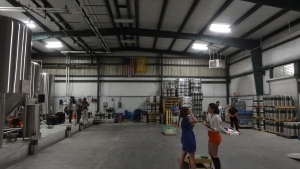 Southbound Brewing Company opened in April of 2013 as the first and only brewery in Savannah. Moon River (which we visited the day before) is a brewpub in town and there is also a craft beer festival held in town, however before Southbound there were no other production breweries. This proved to be a difficult hurdle to overcome for Co-founder and Brewmaster, Smith Mathews, since the city leaders needed to be convinced that his business plan was a good one for Savannah. It took about 2 1/2 years before he was able to win them over and achieve his dream, but thankfully giving up was not an option. 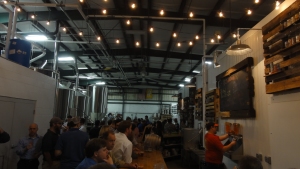 There are a total of five employees at Southbound, two of which are part time. Alongside Smith, there is a Marketing Director named Carly Wiggins and another brewer named Alex Breard. Smith is a native to Georgia and earned a BBA from the Georgia Institute of Technology, all while working over at Sweetwater Brewing Company throughout that college experience. In 2009, he was accepted into The Seibel Institute of Technology in Chicago, Illinois as well as Doemens Academy in Munich, Germany. He returned to Sweetwater for a little bit after he obtained an International Diploma in Brewing Technology from the World Brewing Acadamy, and was later hired on as the head brewer and first employee of a start-up brewery in Charleston, South Carolina. Carly began working for Sweetwater in 2007 after receiving two degrees in Industrial Design and Business Administration from The Georgia Institute of Technology, and in 2011 she ended up at the same start-up brewery in Charleston that Smith was brewing for at the time. Alex also attended the Siebel Intstitute of Technology, which is where he first met Smith and ended up earning the same International Diploma in Brewing Technology. So, even though this is a brand new brewery, they already have a lot going for them.

Southbound Brewing plans to create around 6,000 barrels a year, but their goal for 2014 is 1,600. To help them achieve those goals, they will be utilizing a 4-vessel 30 bbl brewhouse, four 60 bbl fermenters, and a 60 bbl bright tank. At first the beer will only be distributed in kegs, but they are looking towards canning in the future. Since canning is such a large investment, they have chosen to hold off on that for now. The brewery already has around 150 – 200 accounts in Georgia and some of South Carolina and aspires to become the most innovating and exciting yet by bringing the American craft beer revolution to the area. 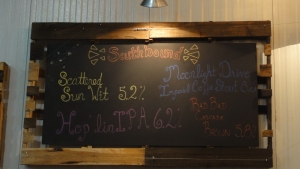 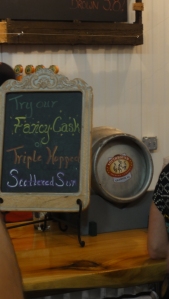 Currently there are two year-round beers: Scattered Sun Belgian Wit and Hoplin’ IPA. Hoplin’ IPA is a very dry-hopped American IPA with a citrus and pine aroma and flavor. It ridiculously utilizes Magnum, Amarillo, Centennial, Cascade, Chinook, and Citra hops, and comes in at 6.2% ABV. The Wit has hints of coriander, lemon and orange, and during the grand opening party, there was also a triple-hopped cask of the wit being offered that was delicious! Some of the other beers Southbound has to offer include the Day Trip’ler Belgian Style Tripel, Iron Lion Pale Ale, Bad, Bad Cascade Brown, and Moonlight Drive Imperial Coffee Stout. Smith informed us that the Iron Lion more than likely won’t continue to be produced since Sweetwater has a Pale Ale that already has a huge share of the market in that area, but definitely keep your eyes out for the others! 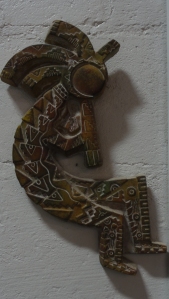 Artwork throughout the brewery incorporates Kokopelli people with hop heads, and in-tune with the band playing that night, the Kokopelli represent the spirit of music (along with fertility, but let’s just pass over that detail for now). Tours are held in multiple intervals Wednesday – Friday from 5:30 – 7:30pm, as well as on Saturdays from 2 – 4pm. It will cost you $10 for a pint glass, or you can bring two canned food items to get a discount while at the same time help out with a good cause, as those cans will go to a year-long food drive. You can also opt to get a free tester cup with 6 samples, but due to the laws of the state, you cannot get both the pint and the free samples. Huge thanks to Smith for taking time out of his grand opening day to chat with us! 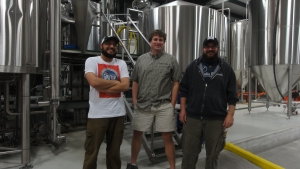 One thought on “#40 – Southbound Brewing Company in Savannah, GA”