Our brewery visit on Wednesday, 2/19/14 was a unique one. Rather than going to Chattanooga Brewing Company’s current up and running facility in Chattanooga, TN, we made our way to their future site which is nearing completion just a few miles away. Co-owner and brewer Jonathan Clark was just finishing up his busy day when we arrived and was kind enough to give us insight into the past, present, and future of the brewery. 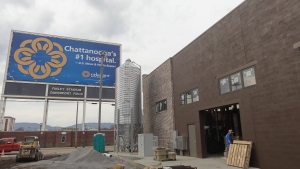 Jonathan and Mark Marcum, the other co-owner and brewer, were at one time both engineers and homebrewers. After Jonathan’s engineering firm decided to move to Mexico and send him on his way with a severance check, while around the same time Mark parted ways with his job through an early retirement, the two decided to combine forces and resurrect the historical Chattanooga Brewing Company in 2010. John stated: “We’re Chattanooga guys reviving an old Chattanooga brand and that’s the biggest part of what we’re trying to do here; obviously make good beer that our folks around here want to drink.” From 1890 – 1915, Chattanooga Brewing Company (CBC) was brewing around 150,000 barrels of beer in a huge warehouse by the river which spread a full city block. Tennessee was a little ahead of the curve in regards to prohibition (or behind?), enacting the law before most of the rest of the nation. Once the prohibition went into effect, CBC attempted to switch gears by making tonics amongst other products, but then officially went out of business in 1920. The guys who were starting Coca-Cola then purchased the old bottling works and used it for one of the first Coca-Cola bottling plants in the country.

The current facility is located in the North Shore area of town in a 1,200 sq ft building, where they utilize a 3.5 bbl brewhouse, four 7 bbl and two 20 bbl fermenters. Last year they produced a little over 800 bbl, but were still getting their new 20bbl tank online and could have done around 1,000 if it had been fully active all year. The new building is located just a few miles away from the current one, across the street from Finley Stadium where the UTC Mocs play, a block away from the First Tennessee Pavilion where concerts, a weekly market, and other events are held, next door to a trampoline park where there is a 150 person Trampoline Dodgeball league, and just a couple doors down from the future site of a bowling alley. There’s a perfect view of the stadium from the second floor of the brewery, so they plan to have viewing seats installed. Inside you’ll find a 15 bbl brewhouse made in America, a 30 bbl stacked hot liquor tank, four 60 bbl fermenters, and eventually they’ll be bringing the two existing 20 bbl fermenters over. They have another fermenter that they’re going to use as a bright tank for the time being, until they are able to add a second row of 120 bbl tanks. All of this is located in a 7,500 sq ft building, where 6,000 sq ft will be utilized as the brewery space and 1,500 will be used for a restaurant and kitchen. Using all of this new space and equipment, Chattanooga Brewing Company will be good for about 5,000 bbl per year as it is right now and closer to 8,000-9,000 bbl once the second set of fermenters is purchased and installed. 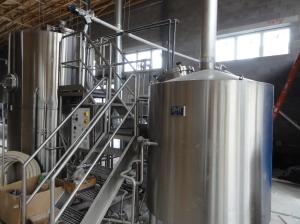 As homebrewers, both Jonathan and Mark had chillers in order to brew lager style beers, so they continued their love for the style by splitting the production of lagers and ales about 50-50. An Imperial Pilsner was the flagship of the original brewery and, although they couldn’t find the original recipe, they know that the owners from 100 years ago were South German guys. Using that knowledge they brewed a 5.7% ABV South German Munich Helles style beer which they figure is close to what they would have brewed back in the day, then called it an Imperial Pilsner. They have two other beers which they consider to be their staples: a 6.2% ABV west coast style IPA that is dry-hopped with Zythos and Chinook hops, and a German bock style lager called ChickBock that is dark, malty, and comes in at 5.9%. Jonathan also told us they have four seasonals, including a Black Lager, Stout, Winter Warmer, and Pale Lager. With the new space, they plan to add on to their current assortment as well as begin canning on a new canning line.

Chattanooga Brewing Company’s current facility is open for growler fills Fridays 5 – 9pm and Saturdays 1 – 9pm, but will expand their hours once the new building opens in just a few weeks. There will also be a self-guided tour through a viewing area on the second floor, which will have explanations on little plaques that tell you about the equipment and brewing process in each area of the brewery. Big thanks to Jonathan for showing us around the construction site, as well as pointing us over to Community Pie in downtown where we were able to try out CBC brews! 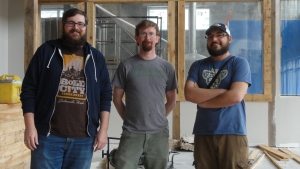