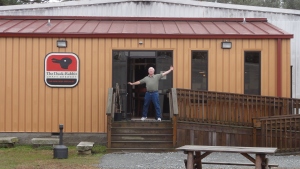 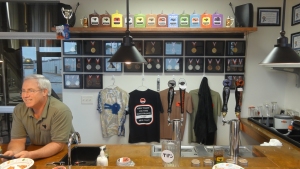 The owner, Paul Philippon, was not there the day we visited, so we met with brewer Pete McCabe. Pete has been with Duck-Rabbit for about a year, which he came to after spending a good amount of time working at all of the multiple locations Great Dane Brewpub has in Wisconsin. In the past, Pete had tasted Duck-Rabbit’s Baltic Porter at GABF one year and fell in love, so when he applied for the job, he made sure that he would be one of the brewers who got to make that specific beer – that wish was granted. Speaking of GABF, the brewery has won numerous medals there, as well as taking home more at other festivals like the Carolinas Championship of Beer. Pete also informed us that the brewery specializes in dark beers simply because Paul likes dark, malty beer and their motto is “Dark beer for happy people.” Although Paul does not brew much anymore, he still helps out on the bottling line and works mostly on the business side of the operation. 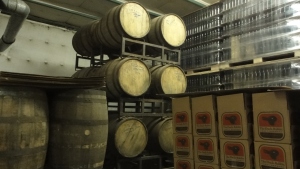 The lightest beer they have is an Amber Ale, which is also one of the beers they offer year-round. A Milk Stout, Brown Ale, and the Hoppy Bunny APA (American Black Ale) are the three other beers in circulation year-round, which can be found both on tap and in 6-packs of 12oz bottles along with the Amber. The Milk stout is their most popular beer and accounts for over 60% of their sales. Another brew they do that is available for about 5 months every year is the Porter and the rest of their repertoire consists of specialty, more-limited releases. Duck-Rabbit makes three lager-style brews at different times, but none of them are available through the whole year: Duck-Rabbator Doppelbock, a Schwarzbier, and a Märzen. Some of the other specialty offerings at the brewery include the Rabid Duck Russian Imperial Stout, a Barleywine, and a Wee Heavy Scotch Ale. Also, we got to try Paul’s Smoked Holiday on tap while we were there, which is part of a unique annual release where the longest tenured brewer at the facility gets to come up with their own recipe to market under the tag ‘Paul’s Holiday X.’ Paul’s Holiday Rye IPA was the one made last year by Scott, a brewer who used to work there. We were told that the employees sometimes sing to the yeast and for the most part Duck-Rabbit utilizes traditional ingredients, however there are some exceptions to that, such as an oyster stout they did last year and a beer they made at one point in time that had cherries in it. They have also had a barrel-aging program for about 7 years, but those mostly go to festivals or get put straight into kegs; if you want them to do more of these like I do, be sure to let them know! 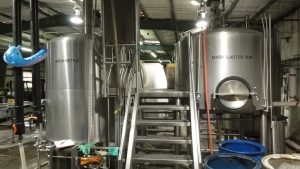 The brewery is celebrating their 10 year anniversary this year and, aside from the fact that they have not decided on exactly what they will be doing yet, they will commemorate the occasion in some way. Duck-Rabbit currently has a 20bbl brewhouse, three 80 bbl fermenters, two 60s, four 40s, and two 20s, and made around 7,700 bbl last year. Paul bought and owns the large plot of land where the brewery is found, so they are looking to build another warehouse on it to be able to expand their operations. They hope to move the storage and add another loading dock to the new warehouse so they can add more tanks in the current building. As of right now the beer is distributed to NC, SC, GA, TN, VA, PA, and DC after it is kegged or bottled on a bottling line that has a horizontal injection filler and can do around 75 cases in an hour. Big thanks to Pete for speaking to us, and to Tony for hanging out with us at the bar!

One thought on “#70 – Duck-Rabbit Craft Brewery in Farmville, NC”