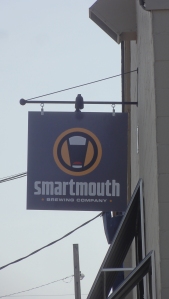 The night of Saturday, 3/8/14 was the first time we utilized Couchsurfing in Norfolk, VA and, after having a great experience with our hosts, we spent most of Sunday afternoon hanging out with Greg Papp, the head brewer of Smartmouth Brewing Company. Smartmouth is actually open Wednesday through Saturday, but Greg was kind enough to spend time with us and give us a detailed look into the brewery. Greg and Porter Hardy IV, the President of Smartmouth, originally opened the doors to the facility in October of 2012 and have a goal to be super professional, clean, organized, and make good, easy drinking beer for everyone while supporting the community and waterways at the same time. They really want to get people in the area acclimated to good craft beer and, since they had expected 500 people recently at their one year anniversary where around 5,000 people showed up, it looks like they are doing just that. 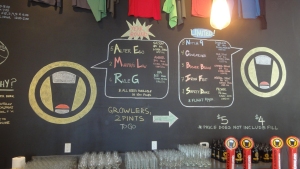 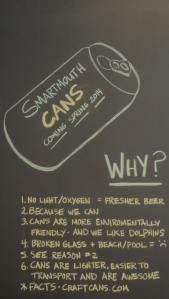 Smartmouth is only distributed in kegs in Virginia right now, but they are getting a canning line at the end of this month and will be canning their three year-round flagship beers: Alter Ego Saison, Murphy’s Law Amber, and Rule G IPA. More than likely, their two seasonal offerings – Cowcatcher Milk Stout and Uber German Hefeweizen – will be canned soon as well. They have many more beers to offer and try to have three unique beers on tap that are only available at the brewery at all times. While we were there, Safety Dance Pilsner, Bashor American Brown Ale, and Iron Fist Russian Imperial Stout were on tap. Notch 9 Double IPA was also available and, since it just won a bronze at GABF for the Double IPA category, they try to keep it on as often as possible; they are also talking about putting it into 16oz can but nothing official yet. In their first year, Smartmouth produced about 1,400 barrels and are hoping to boost that significantly to about 5,000 bbl by the end of the year. This increase will be helped by their recent expansion and new tanks coming in July, however, they are going to make sure to saturate the local market first before expanding the distribution since the demand is so high right now. 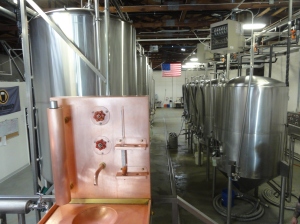 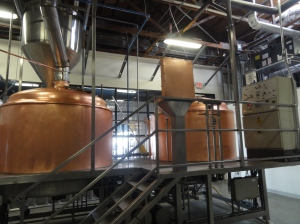 Greg told us that the brewery has a strict standard of not putting out any beer in under 17 days, regardless of circumstances, and a lot of the beers are named after railroad terms. For example, Rule G is a rule in the railroad industry that means you were drunk at work if the rule is violated. Also, a cowcatcher is the contraption on the front of a locomotive that plows cows off of the track and, since there are 8 notches on a train’s throttle, Notch 9 is similar to cranking it up to 11. The day after we visited, Greg brewed Smartmouth’s first collaboration with the brew master of Green Flash, Chuck. It is going to be a super hoppy, dry-hopped Saison that will come in at a low ABV around 5.5%. The two of them brewed the recipe using some experimental hops, Azacca and Mandarina Bavaria, as well as Citra. We were also informed about a new coffee porter that was not released when we visited, but has since been, and uses coffee from Eastern Shore Coastal Roasting Company in Eastern Shore, VA. 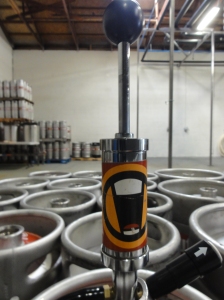 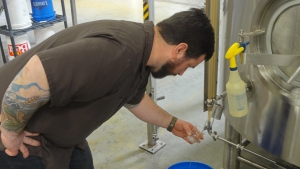 Every couple of months, the brewery has a local artist come in and put up a chalk design on their wall, as well as put up some of their artwork on the walls for sale. In addition, a lot of the proceeds from Smartmouth’s beer goes towards organizations who are trying to clean up the water in the area, like the Elizabeth River Fund. In-line with that, they like to help rebuild local oyster cultures and host an oyster roast at the brewery every year. Every Wednesday they have a traditional hand pump firkin offered in the taproom and you can usually find food trucks there every Thursday through Saturday, as well as live music every Friday and Saturday. Huge thanks to Greg for speaking to us; we definitely had a blast and are looking forward to the future of this brewery! 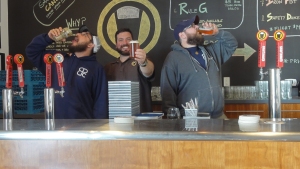 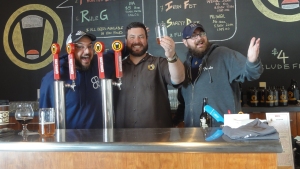 One thought on “#72 – Smartmouth Brewing Company in Norfolk, VA”