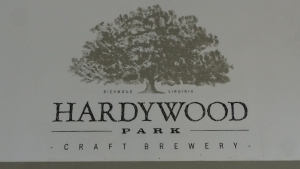 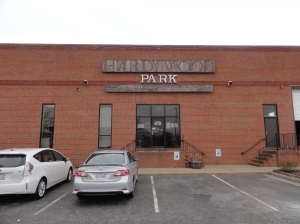 When we first got into Richmond, VA, we made a night of hanging out at Capital Ale House trying a few of the beers local to the area, and then got to spend some time at Hardywood Park Craft Brewery on Monday, 3/10/14. We were lucky enough to meet a significant portion of the staff during our visit, but spent most of the time talking to head brewer Brian Nelson and co-founders Patrick Murtaugh & Eric McKay. They walked us around the original 12,000 sq ft facility as well as the other 19,000 sq ft building next door, while telling us all about what the brewery has to offer now and in the upcoming future. 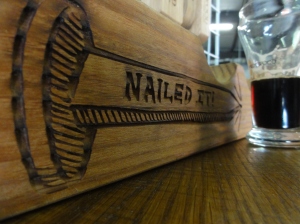 Right off the bat, Brian and Patrick told us about their two year-round flagship beers: Hardywood Singel and Hardywood Cream Ale. Since they wanted something that was drinkable yet different from other flagship beers, Singel was the first beer to be offered; it is a Belgian Blonde Ale that comes in at 6.2%. Next came the Cream Ale that is offered in a can as a tribute to the first canned beer ever sold in 1935 – Krueger’s Cream Ale – in Richmond, VA. The original can had a flat top and instructions for how to open it with a church key printed on it, so Hardywood comically placed instructions for how to open up their pull-tab cans on their Cream Ale. Great Return is another beer they offer in cans, which is a 7.5% west coast IPA that utilizes Cascade, Columbus, Apollo, Galena, and Simcoe hops and is sold as a fundraiser beer for the James River Association. $10 from every barrel brewed goes to that association and the name refers to the return of the Atlantic Sturgeon to the James River which used to be plentiful to the region but, after they were thought to be extinct in the area for about 60 years, showed up again in recent years. Another fundraiser beer will be coming out soon for the Virginia Capital Trail Foundation, which is a group working on making a biking & running trail in between Richmond and Williamsburg.

During our visit, they had a British-style barleywine aged in bourbon barrels finishing up in one of their fermenters, so we got to taste a fresh sample of it; it was released five days later on March 15. That beer falls under their Barrel Series, which is a line of beers they offer aged in different vessels, including (but not limited to) bourbon, tequila, wine, and apple brandy barrels. Some of those barrel-aged offerings are variations of the beers found in the Reserve Series, which is a line of products they have that use at least one local ingredient in them. A few examples of the local ingredients they have used in that series are things like pumpkins, honey, ginger, blackberries, raspberries, hops, and locally roasted coffee. The most popular beer at Hardywood is their Gingerbread Stout, which rocks a world-class 100 score from ‘THE BROS’ on BeerAdvocate and 100 for style on RateBeer. We were also informed that they are brewing a Pilsner for the first time right now and Hoplar IPA (a dry-hopped Imperial IPA conditioned on Virginia tulip poplar wood) is soon to be released on March 29. 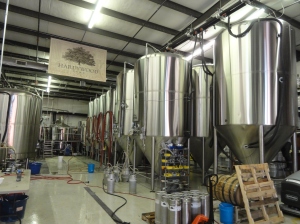 Around 4,400 barrels of beer were made at the brewery last year and they are on target to make about 8,000 this year. They also have a new taproom in their second building in-line with the expansion but, although it is technically open, it is not quite finished. We had the opportunity to watch an artist painting a beautiful mural in the new taproom and it symbolizes the fact that almost everything they do at Hardywood gives back to the community in some way – from the mash paddle being made from fallen trees in Richmond, to hiring local artists and masons for certain jobs, to using local ingredients. 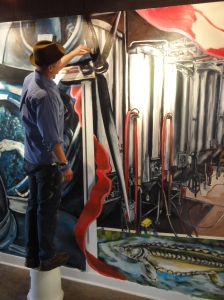 Hardywood Park Craft Brewery will be participating in a number of different events this year. Along with being sponsors for Savor in DC, they also have a race coming up in April, their annual Fourth of July party, an Oyster Festival on Father’s Day in collaboration with Rappahannock Oyster Company, and much more. Their anniversary party will be on or around October 23 and every year they release a special beer for the event – last year they released a tequila-aged Tripel. Also, starting in the spring they will have a farmers market up at the brewery on Wednesday nights. Big thanks to Brian, Patrick, and Eric for showing us around the brewery and giving us all of these insights! 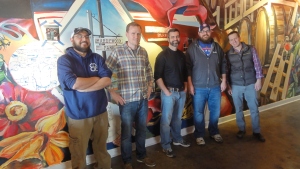