Our visit to Blue Mountain on Thursday, 3/13/14 was a unique one, in that we visited both the brewery/ restaurant Blue Mountain Brewery in Afton, VA as well as the production facility Blue Mountain Barrel House in Arrington, VA. Both facilities have taprooms, fields of cascade hops, incredible views, and awesome beers, but are also distinctive in their own ways. 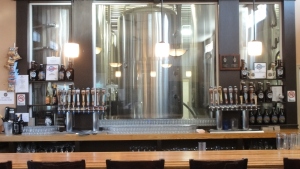 The brewery/ restaurant in Afton is the original location which opened in 2007 and produces around 3,000 bbl per year using a 15 bbl brewhouse. While there, we met with co-owner & brewer Matt Nucci, executive assistant Anne Marie Vincent, and CFO/ co-owner Mandi Smack, who were all kind enough to sit with us for a significant amount of time and give us all kinds of information about Blue Mountain. This location was modeled after a winery and was originally about 3,600 sq ft, but around 3 years ago they expanded and more than doubled in size to nearly 10,000 sq ft, boosting their guest capacity to over 400 seats between the outside patio and indoor area. There are always 10 different beers on tap and the menu is updated up to 3 times a week. Several items on the food menu incorporate their beer, including a bread pudding that utilizes Evil 8 Belgian-style Dubbel Ale and their fish tacos which have Full Nelson Pale Ale in the breading. All of their food is prepared from scratch by Chef Rob Bond and they pride themselves on using local ingredients in their food as a way to support the community and highlight agriculture in the area. For example, all of their bread comes from Goodwin Creek Farm, which is a bakery just down the street from them.

When we made our way over to the Barrel House, we met with co-owner, head brewer, and husband of Mandi, Taylor Smack, who informed us that the Barrel House location opened up in 2012 and is now churning out around 12,000 bbl per year with a 30 bbl brewhouse. Currently they have 90 bbl fermenters, but they will be getting some 120 bbl tanks in a couple of months. Taylor, who at one point worked for Goose Island, also told us all about how they use Parti-Gyle brewing at the Barrel House – an uncommon method where a single mash is split up to make two beers – allowing them to have sister beers born from the same mother mash, but hopped, fermented, and aged differently. Most of the beers are bottled on-site for distribution, they have four canned beers thanks to a mobile canning unit (including what was the first canned craft beer in Virigina back in 2008), and they are getting their own canning line next month. 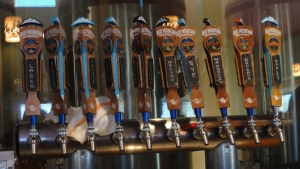 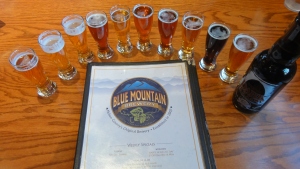 The original Blue Mountain line-up consisted of 6 beers: Kolsch 151, Classic Lager, Full Nelson Pale Ale, Dark Hollow Artisanal Ale (an Imperial Stout aged in charred American oak bourbon barrels), Nitro Porter, and Rockfish Wheat. Since then, they have added multiple different brews to their assortment, like the beers in the Progeny Series: MacHayden’s Wee Heavy Scotch Ale and Evan Almighty Düsseldorf-style Alt Beer both named after Mandi & Taylor’s kids, as well as Maggie Maibock Heller Bock Lager named after Matt’s daughter. Matt was quick to tell us that they had also done a collaboration with Champion in Charlottesville which they termed Rye Barchetta based off the RUSH song ‘Red Barchetta.’ Matt is a huge RUSH fan and, for the others out there, take note that the Champion beer menu cleverly states ‘Best By 2112.’ Barrel aging is now fully done at the Barrel House and they barrel age quite a few beers (including sours) in wine, Maker’s Mark, Buffalo Trace, and multiple other types of barrels; right now they are aging Sour Banshee. Blue Mountain beers can be found in 12 states… and Denmark!

Every Sunday you will usually find a live band performing outside the Brewery. Blue Mountain also holds a big hop harvest annually where people come out and help pick hops from the garden so that the brewers can do a wet, fresh hop addition to Blue Reserve Belgian-American Pale Ale. Although they do not hold a specific anniversary party in October, they go all out with an annual Oktoberfest celebration where the staff dresses up in original German attire like lederhosen. Big thanks to Anne Marie, Matt, Mandi, and Taylor for all showing us such hospitality during our visit! 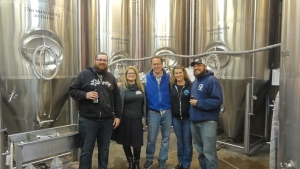 One thought on “#79 – Blue Mountain Brewery in Afton, VA”