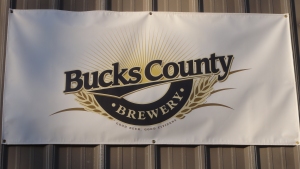 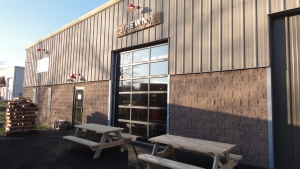 After traveling across multiple states for a few months, we found ourselves driving out to Bucks County Brewery in Pipersville, PA for our milestone 100th brewery visit on Saturday, 4/5/14. The brewery first opened on Super Bowl Sunday weekend this year after spending two years in planning, ran out of almost everything immediately, lost power for eight days, then got snowed out for two days. They did not let that slow them down, though, as they brewed all seven days the following week to get back on their toes. Normally Bucks County brews two to three times a month in order for them to continue “Making the World a Better Place, One Beer at a Time.”

Something very unique about the brewery that we noticed as soon as we drove up is the fact that it is attached to a distillery known as Hewn Spirits. Andrew Knechel, the owner and brewer at Bucks County, was there to show us around and told us that he had placed an ad on Craigslist looking for a location in the area, when Sean Tracy of Hewn Spirits contacted Andrew to let him know that he was planning to open up a distillery in the area and had some extra space. They ended up meeting and came to the conclusion that they both viewed the same things to be important, so they decided to share a building. Bucks County Brewing & Distilling is a parent company that owns the whole building and rents out to both Hewn and Bucks County, so the parent company owns the shared area and all of the parking outside. Because of the partnership, Bucks County will be buying a lot of the barrels from Hewn to age their beer in. At the time of our visit, Andrew was using a bourbon barrel to age a smoked butternut squash porter that Hewn had also aged a rum in; that beer will be presented at the Yardley Beer Festival on May 10. 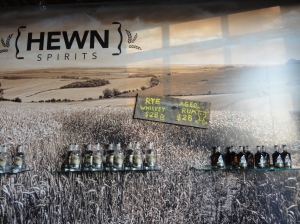 At the time of our visit, we were told that Barley Nectar Vanilla Porter was their best seller. To make Barley Nectar, the porter is racked on top of fresh Madagascar Vanilla Beans that have been soaked in Bourbon to allow it to blend and age for several weeks. That and five other beers were on tap when we were there, and we were notified that a seventh had just kicked before we got there. Saison Du Lever Du Soleil was on the other side of the spectrum from the vanilla porter, as it was a light, dry Saison with a blend of jalapeno and orange blossom honey; the jalapeno added some pepper flavor to it, but not too much heat. Andrew also told us about two beers he has made using ingredients from his brother-in-law’s backyard. The first one used crabapples and the other used Argonaut butternut squash that were around 20 lbs each – he smoked the squash over apples and pecan wood and then added it to a porter. Just down the road from the brewery is a hop farm called Tween Hill, so Bucks County hopes to make a series of fresh hop IPAs using those hops. 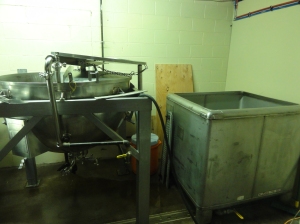 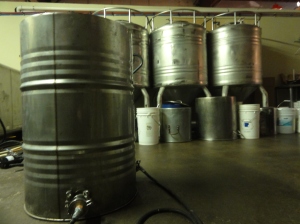 The brewery utilizes a small 1 bbl system right now with a mash tun that can go up to about 15 bbl; there are also a few 7 bbl fermenters. Most of the equipment was built from things that are not related to brewing and in time they will be upping their batches from 1 bbl. They are also going to do a ton of cask-conditioned firkin beers and might even play with some Bret sours in the future, which will all be served from the 8 taps found in-house in the taproom. For the most part Andrew does everything, but his wife is there to help out and he has a handful of volunteers, including Shane Grimes who we were told is good at dialing recipes in. With a hope to hit somewhere in between 200 – 250 bbl this year, Bucks County will be holding their grand opening with Hewn Spirits tentatively on May 17th – there will be food trucks, bands, fun, good beer, and good spirits (in more than one way). Huge thanks goes out to Andrew and his wife for inviting us to their brewery to celebrate our 100th official visit of the year!