Our first visit in the first state was to the Dogfish Head Brewpub in Rehoboth Beach, DE as well as Dogfish Head Craft Brewery in Milton, DE on Tuesday, 3/25/2014. Considered to be a regional craft brewery, this rapidly expanding business is ranked as the 13th largest craft brewery in the United States and 20th largest overall based on findings from the Brewers Association. We were lucky enough to jump on a small tour of the production facility with just four other people as Kristie Lankford gave us a personal, detailed look into what makes Dogfish Head unique. 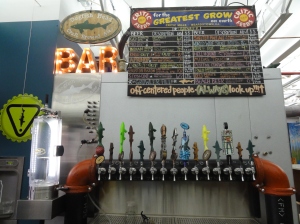 * Learn more about their history below the main article

“Off-centered ales for off-centered people” is their slogan and they stay true to that with beers like Choc Lobster made with chocolate and lobster, Celest Jewel Ale made with lunar meteorites crushed into dust (both of which were available at Dogfish Head Brewings and Eats for consumption at the pub only), as well as many other brewpub exclusive and packaged beers. For now, 60 Minute IPA (which accounts for 45% of their sales), 90 Minute IPA, Aprihop, Namaste, and Indian Brown are the five brews made on their new 200 bbl system; they still use a different 100 bbl system for most of the others. 75 Minute IPA is the only distributed beer of theirs that is cask conditioned and is actually a blend of 60 Minute and 90 Minute. In the past, collaboration brews with musicians have been offered and, although we can’t say who the artist is or what the beer will be, we can tell you there will be another music collaboration coming out this year. Also, the brewers try to hold onto anything over 10% ABV (as well as some under) in a space set aside specifically to age beers; there is a case of 2004 World Wide Stout in that collection that Sam is saving for his kids when they turn 21.

A recent expansion took around 3 years and 52 million dollars to complete. A new traditional German 5-tank 200 bbl system went live this past July and the original 10 gallon system from 1995 is on display in the same room; it is pretty incredible to see where they started versus where they are now. Also, an 80,000 sq ft building called the Off-centered Center opened this past August and houses an insane bottling line, packaging line, and more storage. They have 26 tanks inside that are either 200 bbl or 300 bbl and outside there is a total of 30, 8 of which are new and currently being installed; the other 22 were added in stages beginning in 2009. Many other things were added so that tours can be easily done, like walkways above the brewing space. Some equipment has been comically named, including names like “Sofa King hoppy,” “Me so hoppy,” “Tunnel of love,” and “Sir Hops A Lot.” Dogfish Head also has the only wooden aging vessel made from Palo Santo, which cost around $140k to make since the wood is expensive, had to be cut with diamond saw blades, and they had to get governmental approval to use it because it had never been used before. 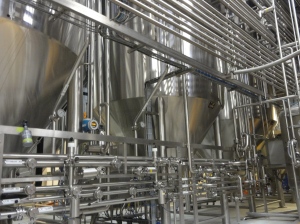 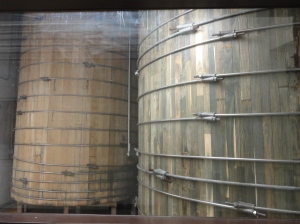 Many events are held all over the country, including the upcoming ‘Off-centered Film Festival’ at Alamo Drafthouse in Austin, TX with special guests The Lonely Island. In mid-June, the brewery will be holding their annual vinyl swap, artisan craft fair, and cask beer tasting event with live music termed Analog-A-Go-Go. On a more regular, weekly basis they hold Wayback Wednesdays at Dogfish Head Brewings and Eats in Rehoboth during the off-season where they tap something that is at least two years old. At the Milton brewery, they feature vintage beers year round on Thursdays from 4:30-6:30 with Vintage Vinyl Happy Hour. They get out their turntable, spin some classic vinyl, and have 4 vintage beers that you can taste or buy to take home.

Tips are not expected or required in the taproom at the Milton brewery, but if you leave one they put it towards a different charity each month. A food truck can be found outside, so we tried some chowder made with 60 minute and Palo Santo Marron which was incredible. Their employees are lucky to receive certain perks like getting a case of beer with every paycheck and Beer:30, which is a free happy hour held to bring a sense of community to the workplace every Friday from 430 – 6pm where all staff members can invite their family and friends. Back over at the brewpub, they opened up a distillery in 2002 making them the second brewery in the US to have a distillery. Big thanks to Kristie for giving us a detailed, passionate look into the brewery and to Kelly Sharp for getting us set up! 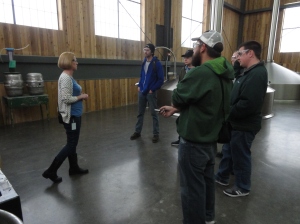 HISTORY
Sam Calagione is the founder and president of Dogfish Head who fell in love with craft beer in the early 1990s after trying beers that were new to him, including Sierra Nevada Celebration Ale. Within a week, he picked up a homebrewing kit and recipe for a pale ale from a store in Manhattan, then picked up some cherries from a bodega on the side of the road in order to make it a cherry pale ale. That first beer turned out well and, after introducing some of his friends to it, he jumped up on a table and proclaimed that he no longer wanted to be an English teacher and had found his true passion in life. One day Sam was telling his father about his new desire to open up a brewery while they were out for a jog near their vacation cabin in Maine. After they past a road sign for Dogfish Head Road (which is a road to a piece of land in Boothbay Harbor with the same name), his father told him that it would make a good name for a brewery; the rest is history. 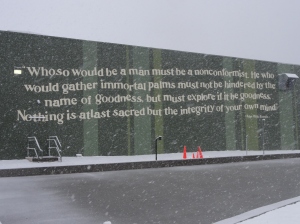 Delaware has very business friendly laws, no sales tax, relatively inexpensive land, and is within a few hour drive of multiple metropolitan areas, however the main reason Sam decided to open a brewery there was for a girl from the area who wanted to live there; they are now married. Unfortunately at the time, Delaware was one of few states who still had laws that dated back to prohibition and it was actually illegal to open a brewpub there. Rather than be deterred, Sam went to Dover and started talking with a lot of the law makers to convince them that it would be a positive change for the economy. He helped spearhead the changes that allowed Dogfish Head to become the first Delaware brewpub in recent times. The original location was opened in 1995 and, using a 10 gallon Sabco hombrew system, Shelter Pale Ale was the first beer he did; Dogfish Head still makes that beer. At that time, Dogfish Head was considered the smallest commercial brewery in the United States.

More Photos (including photos of the brewpub)