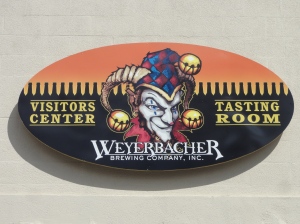 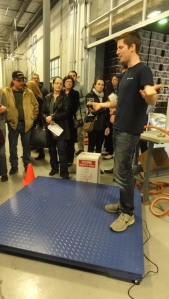 Following a formal tour that busy afternoon, we were able to speak with the Visitors Center & PR Manager, Bill Brag, to get some insight into the company’s history and philosophy. Bill started about 8 years ago as a volunteer but quickly found himself hired on as Manager of the Visitors Center, later on taking on additional roles of office manager and PR. At the new facility the brewery has continued to expand, now occupying roughly 20,000 sq. ft. of space, the large room now housing bright tanks and the bottling line was opened up just this past January. The original 10 bbl brewhouse was upgraded to a 25 bbl in 2005, purchased from PA’s Victory Brewing Co., and is currently under transition into a complete 40 bbl system. This increase in brewhouse size has obviously equated with vast growth since occupying the new facility. However, Bill shared that the growth has occurred steadily around 30% for the past five years, rather than in huge spurts, enabling them to keep up with quality production. This previous year Weyerbacher moved from micro to regional brewery status – finishing with production over 17,200 bbl – and they expect to continue that pace of growth going into 2014. Beers are currently distributed to 18 states along the east coast. In 2013 the brewery completed the two year transition of their rebranding initiative in which the labels were standardized to create a more cohesive and identifiable brand on shelves, with the jester from the popular Blithering Idiot Barleywine becoming a company logo.

Speaking of Blithering Idiot, It’s probably time to give some insight into the variety of bold beers being crafted at Weyerbacher Brewing Co. Current head brewer, Chris Wilson, was formally trained at UC Davis and has been with the company for 10 years. Aside from the aforementioned barleywine, the other bestselling, year-round offering and a beer that was part of the initial push into the setting the brewery apart is Merry Monks, a bottle conditioned Belgian-style Tripel. The roasted malt side is represented by the Old Heathen Imperial Stout and a Belgian-style Imperial Stout named Tiny. Moving toward the hoppy end of the spectrum, the brewery offers Verboten Belgian-style Pale Ale, Last Chance IPA, and Double Simcoe Double IPA. Year-round beers are available in kegs and 6-packs of 12oz bottles. An interesting story about Verboten, the beer was originally part of their first Brewers’ Select series (I’ll discuss this shortly) called Alpha. The popular beer was brought back as a seasonal called Zoten. They received a Cease & Desist from a European brewery and chose to rename the beer Verboten which fittingly translates from German to ‘forbidden’.

Numerous seasonal beers are released during the year: Insanity, the bourbon bbl aged version of Blithering Idiot, is released in January; February sees launch of bourbon bbl aged Old Heathen under the name of Heresy; the spring seasonal available beginning April is White Sun Wit; Imperial Pumpkin releases in July; AutumnFest in September; Winter Ale in October; and QUAD Belgian-style Quadrupel Ale in November. Viridis Lupulus is a spring hop beer first released in 2013 that is set to change with a selection of hops from year to year. Riserva is an American Wild Ale that is fermented with raspberries for over a year in oak barrels. Many of the barrel aged beers are distributed in 750mL bottles. The previously noted Brewers’ Select series – consisting of experimental one-off creations meant to serve as a creative playground for the brewing staff – are released in limited quantities every few months. Regarding the naming methodology, the brewers have made their way through the entire NATO phonetic alphabet and, beginning in 2013, started utilizing names of constellations of the northern hemisphere. The styles have varied drastically and can be purchased in 12oz bottles solely from the brewery’s visitors center with extremely limited keg distribution to select regional accounts. Finally, Weyerbacher has celebrated each year in business since the decade mark with a special anniversary release, styles ranging from spiced saison to triple IPA to this year’s upcoming 19th anniversary release, a tart mango wheat ale.

Bill also showed special pride in the brewery’s work with the community. The Last Chance IPA name comes from the company’s goal of helping give pets another chance. They targeted the most popular beer style, IPA, and a percentage of wholesale receipts go towards local animal charities on a rotational basis. The charities must be 501c and are entirely staff driven. This past March alone $2,800 was raised and to date the program has donated a total of over $50,000 since inception in May of 2012. Another fundraiser was done with a Belgian-style Dubbel brewed with Italian plums named Althea that was a homebrew recipe created by NJ sales rep, Natalie DeChico, and her father. They wished to do a cancer fundraiser and settled on partnering with Leheigh Valley Health Network. A group of doctors there established a fund from their own salaries to ensure that patients in remission could afford to come back for needed follow-up visits. 100% of the proceeds from that beer and accompanying t-shirts were donated to the fund. Aside from bottle releases, Weyerbacher has limited special events due to not having complete ownership of the property and parking lot – events have to be kept indoors as anything outside on the property requires a special events permit. However, the Visitors Center offers broad hours Mon-Sat 12-7pm and Sun 12-5pm with an up to date tap listing. Guests can receive six free samples and purchase beers to go. Tours are also free and are offered Fri at 5:30pm, Sat at 1, 3, & 5pm, and Sun as requested. We really want to thank Bill for taking the time to share his insight into the Weyerbacher story and to the rest of the Visitors Center staff for being so friendly and welcoming.