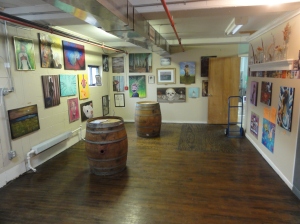 Other things we learned:
* First small brewery of its kind to open in CT
* For the most part, Mark does everything, but he does have a few volunteers who help out
* About 7 consistent locations to find them on draft; around 10 locations where you can find their bottles
* Had a beer dinner on May 1st at The Corner in downtown Litchfield that was focused around Bison 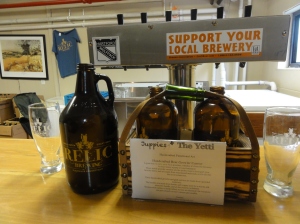 Other notes about their beer:

* Usually pick 3-4 brews to have pretty available during a season
* Have another 4-5 one-offs for each season
* Have 3-4 more returning/ popular recipes each season
* Ryddle was the first bret beer they did
* Brewed an Earl Grey & Lemon Saison recently
* Brewed a beer called Ryepocolypse (Imperial Rye Stout) for their anniversary
* Antiquity, an old ale with molasses, was the first beer they released
* Make more Belgians than any other style
* Transatlantic got its name based on the fact that the ingredients in it are found globally; closest thing to a core beer
* Did a collaboration with Beer’d called Nano-A-Nano
* Have done a few beers where they throw wood spirals into the kegs and let them sit 2-3 months

* Plan to send some of their more popular recipes to another brewery to make bigger batches (40bbl) then package them, which will open up the 3bbl system for more experimental one-offs; hope to do this as soon as June 2014