Once we were done with visiting breweries in Connecticut, we headed back into New York for the second time where we first ended up at Peekskill brewery in Peekskill, NY, north of NYC near White Plains. This is the first brewery we have been to that sends every single wort of theirs through a coolship after boil and they offer multiple different styles. As for the facility, it is a 3-story building with the Cheers-like bar area and brewing space on the first floor, a more upscale, family-dining area and grain room on the second floor, and the coolship is located on the third floor with some storage space and offices. The train from Grand Central Station in NYC comes right by the brewery, is about an hour commute, and the view of the Peekskill Bay is incredible from this location. Next time you’re in the area, be sure to enjoy everything they have to offer with a good beer in hand! 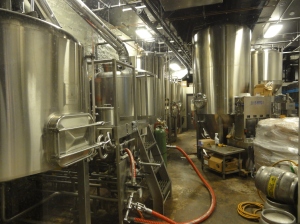 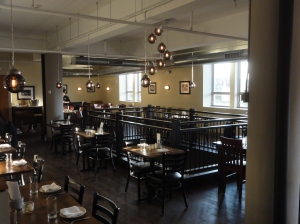 Other things we learned:
* Quote: “We care about our beer-making here deeply and are passionate about what we’re doing, but we’re also fully aware that it’s just beer.”
* Go out to hop selection every year to pick out the hops they’ll use for the year
* Every wort goes into the coolship after boil, which helps them use a lot less water and energy to cool their beer down
* Although they have been in business since 2008, they moved over to the location we visited at the beginning of 2013
* Once a month they’ll do a tap takeover at a bar that carries their products; bring their beer as well as their staff
* Host a free birthday bash every year during the first Saturday in October; now called Hudson Hop & Harvest – more info here
* Have four 30bbl fermenters dedicated to the beers they sell off premise – Eastern Standard IPA, Simple Sour, & Hop Common
* Have three 15bbl fermenters for all on-site beers
* 7 serving tanks, all else goes into kegs
* Artwork on the walls is done by their bartender, “Juice”
* Located right next to the Peekskill Bay (which is one of the deepest parts of the Hudson)
* About 15-20 minutes down the river from West Point Military Academy 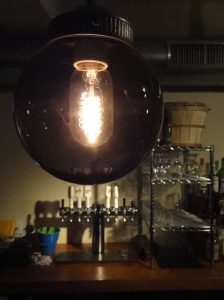 Other notes about their beer:

* Made around 40 different beers last year
* Have anywhere between 8 – 15 beers on tap at any given time
* Crisp, clean, bright, and dry pale ales are their bread & butter
* Lower Standard is a great place to start – it is a play off of their house IPA (Eastern Standard) with lower ABV
* Amazeballs single hop American Pale Ale with Australian Galaxy hops won a Silver medal at GABF this past year (2013)
* Done a few collaborations, including with: Allagash, Cambridge Brewing Company, Bluejacket, Iron Hill in Media, and Crossroads Brewing
* Share the Rainbow is essentially Allagash White with a bunch of fruit they squished in the coolship with their feet. Then, they fermented half of it with a witbier yeast, fermented the other half in the coolship, and then blended
* Vaporizer Imperial Stout is a beer they brewed with Iron Hill in Media
* Flavor Savor is the collaboration they did with Crossroads

Not right now since they recently moved into the new location 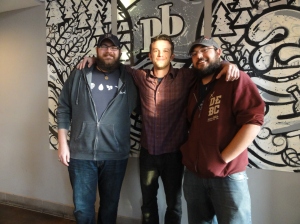