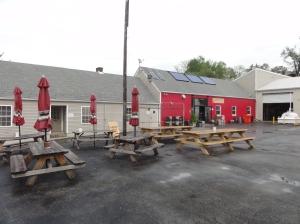 After visiting Against the Grain in Louisville, KY, we made the short drive over to Apocalypse Brew Works. Co-founders Bill Krauth, Leah Dienes, and Paul Grignon opened up the taproom (which they call “The Fallout Shelter”) on May 11, 2012 with the 3 1/2 barrel system they are using today. We spoke to Leah, the head-brewer, while sampling their brews and learned all of the information found below – including the fact that Leah is an active BJCP judge. Between the three co-founders, there is over 40 years of homebrewing experience which helped them open the taproom with 10 beers on tap and maintain that number since. Also, if you happen to be in the area when the world gets taken over by zombies, keep in mind that the brewery makes for a nice Apocalypse bunker since they can lock the razor wire laden gates to keep the zombies out; hence their motto “Drink Beer Til the End.”

* The idea to open a brewery started when Bill, his wife, and Leah were at the National Homebrewer’s Conference in San Diego with their local homebrewing club, Louisville Area Grain and Extract Research Society (LAGERS).

* The brewery and taproom, aka “the Fallout Shelter,” occupies some of the space of the shop for Bill’s plumbing business. Of course this was helpful when doing plumping installations for the brewery.

* “Drink Beer Til the End” – The brewery makes for a nice Apocalypse bunker since they can lock the razor wire laden gates to keep the zombies out.

* Among the founders there is over 40 years of homebrewing experience. Leah, an active BJCP National Judge, is the head brewer, however, all three of the partners brew and tend to have their own specialties. Mostly collaborate on recipe creation. Their newest employees are 2 brewery cats plus 2 part-time people. 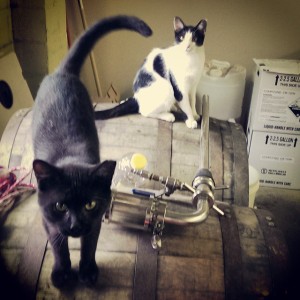 * Sustainability Focus: The brewery water is heated by solar energy. Water and glycol are pumped up onto the roof and heated or cooled, respectively, and solar panels on the roof are also utilized to run pumps. They are using reclaimed materials with a focus on reuse and recycle, including during the building of the taproom bar. Planning to get an Air Quality Egg, which is a community driven air quality sensing network.

* The taproom is open Friday and Saturday and features rotating Food Trucks on site.

* The taproom is dog friendly. In fact, each year during Louisville Craft Beer Week they do a “Yappy Hour” where all proceeds go to the KY Humane Society. The event features food, live music, and collaborative beers with the LAGERS Homebrew Club.

* Other Events: Host anniversary Survival Parties with food and music and had an End of the World party on Dec 21, 2012. There is a local festival each summer, The Forecastle Festival, and the brewery has hosted it’s version, Poorcastle Festival, for the second year this past May for $5 – it features tons of live music on a couple different stages including utilization of a flatbed truck outside of the brewery.

* Leah is growing hops in her backyard and was able to use them in a beer for a fundraiser to support the Mighty Kindness Earth Day Hootenanny, an event for the non-profit organization focused on spreading kindness.

* Considering their focus on sustainability, a lot of local green organizations also like to hold meetings at the brewery. 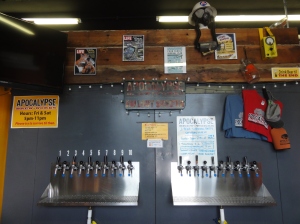 * Opened their doors with 10 beers on tap and have maintained that since. Currently rotating through about 40 different recipes and attempting to keep a range of styles available on tap at all times while still keeping seasonality in mind.

* Working with a variety of yeasts to keep beers stylistically appropriate rather than working with just one house yeast.

* 5 beers (Atomic Amber, Cream-ation, Fallout Dust, IPA, and O’Danny Pivo) are kept on tap at the brewery at all times and a couple beers make it out into distribution.

* APA Series is done with rotating hops but always to the same 46 IBUs. Chose to do this rather than the more common IPA series because it is more balanced, you get a different spectrum of the hops in contrast with the malt backbone.

* Have some 10 bbl fermenters on standby for later use

One thought on “#125 – Apocalypse Brew Works in Louisville, KY”