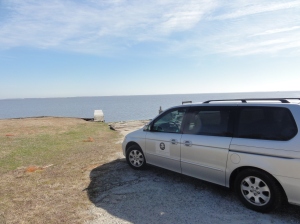 Yet again I’m a little behind on this, so I’m going to split this up into 3 parts and post them throughout the day. Last I updated we were back in Winston-Salem, North Carolina with Chase and Nicole from Foothills and we had a blast hanging out with them. We ended up trekking over to Greensboro where we met up with our friend Nick and his partner in crime Audrey. Nick used to be a brewer at Deep Ellum Brewing back in Dallas, which is where we met him, but he has since moved back to his home state of NC to be the brewer for Haw River Farmhouse Ales in Saxapahaw. The night we stayed there, it ended up snowing pretty hard, so we just stayed in and hung out while eating cookies that their neighbor made for us. It was a great time and definitely comforting to be around some Dallas people.

From there, we made our way over to Raleigh, NC where we ended up going to 5 breweries in one day, including Trophy Brewing. It was Mardis Gras, so we had an excuse for once haha. That night we stayed with one of Nick’s friends, but unfortunately we showed up late, so we passed out pretty quickly, and left early the next morning. Before we left, they gave us a breakfast suggestion, so we made our way to Wimpy’s Grill and ate some of the best biscuits either of us have had in our lives. Haggis got the last sausage gravy biscuit which was about the size of my head and completely smothered in gravy. Later on, we went to Fullsteam to get our quota in for the day, which ended up being the same day that Brew Dogs was filming the first episode for their second season. We even got to indulge in the beer they made, which was the most calorific beer coming in at over 600 calories – an imperial stout made with syrup and bacon, then the beer was used to make an ice cream, then that ice cream was added back to the beer to make a float, and more bacon was put on top. Freaking delicious. Cameras and crew were all over the place so be sure to watch that episode and let us know if you see us!

[Most Calorific Beer Ever]

That night we ended up staying in a super awesome house with Barry & Michele, an incredibly kind couple we had met back at Highland in Asheville. They fed us dinner that night and breakfast the next morning, as we talked with them about the trip, politics, their family, and many other things. From there we shot down to Kinston, went to Mother Earth, and then spent the night at Boiler Room trying out their hot dogs and beer. We talked with quite a few people there, including the bartender, Jamie Cash, who was the only person to laugh at the fact we had visited our 69th brewery that night; she was cool in my book. We slept in our van down by the river that night, then made our way up to Farmville to visit Duck-Rabbit after grabbing some NC BBQ for lunch at Jack Cobb and Son. After Duck-Rabbit, we drove all the way out to the Outer Banks where we parked our van and slept right next to the shore in an RV camping lot where it had flooded earlier in the day. We were able to do so because the lady who works there left a key to get into the park in a mailbox, since she knew it would be closed by the time we got there. The next morning we met her and enjoyed some coffee before heading out.

Breakfast that day was at the Digger’s Diner, which is surrounded by paraphernalia related to the monster truck, Grave Digger, as well as farm animals. Odd assortment for sure, but the food was great! We then spent most of the afternoon at Weeping Radish drinking beer, eating sausages, and hanging out with the brewers. We talked with them for quite a while as we sobered up, then made our way north across the border into Norfolk, Virginia.

We hadn’t planned a place to stay that night, so we jumped on Couchsurfing.org for the first time in hopes that someone would quickly get back to us. Just in case nobody did, we went ahead and found a Wal-Mart parking lot to sleep in, and then our couch surfing request was answered! Amber and Gabriel invited us into their home in Norfolk last minute around 8pm, so we hung out with them for a little, passed out on their floor, then enjoyed some breakfast Amber made for us the next morning. After breakfast, we spent about 5 hours with the brewer of Smartmouth, just talking and laughing over a few good beers of theirs, and then made our way to another couch surfers place also in Norfolk, Amanda and John. They are both doctors at a hospital so had to get up early in the morning (like 4am early), but after getting a much needed hand drum session in with John as he played the guitar, they let us leisurely wake up the next morning and leave after they had already gone to work. 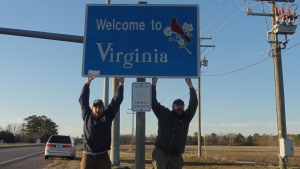 END_OF_DOCUMENT_TOKEN_TO_BE_REPLACED

[Karlos with the remaining 1 bbl fermenter]

After leaving Texas, we traveled east on I-10 and paid a visit to Bayou Teche Brewing, located just north of Lafayette, LA in the small Cajun town of Arnaudville. The brewery was opened in 2009 by Karlos Knott and his two brothers, Byron and Dorsey, in a transformed shipping container on the family’s property where they brewed 1 bbl batches on a daily basis, utilizing 6-8 Blichmann 1 bbl fermenters. Growing demand caused them to contract brew with Lazy Magnolia in Mississippi while they worked on expanding operations into the larger facility on the same property that they operate today. Currently, they utilize a 15 bbl brewhouse with 15 and 30 bbl fermenters. Their biere is now available throughout the southeastern United States and also in New York City as New Orleans artists traveling to NYC demanded to have it available and the brewery was contacted by a local distributor. Current head brewer, Gar Hatcher, came by way of Lazy Magnolia to work at Bayou Teche and has been hard at work tweaking recipes and coming up with new offerings.