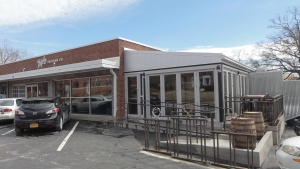 After waiting out another winter storm, on 3/4/14 we headed east from Greensboro to our first brewery visit in North Carolina’s ‘triangle’ which, for those unfamiliar, consists of the area between Raleigh, Durham, and Chapel Hill. We were very happy that afternoon for the opportunity to speak with Les Stewart, head brewer for Trophy Brewing Company. Trophy is a 3 bbl nano-brewery that was founded by Chris Powers and David Lockwood who also own Busy Bee Cafe, a popular Raleigh beer bar. The brewpub just celebrated their one year anniversary before our visit with a party in the roped off parking lot featuring some special release beers and has been seeing expedient growth since its inception. The restaurant and bar area are fairly limited in space and they were previously only open for dinner, however, have opened up their doors for lunch on the weekends to accommodate demand. While Les and his assistant brewer, Josh Wing, are certainly making some great beers for the area, he was quick to give a lot of the credit for the success and quick turnover in beers to the pizza. “Those guys do an amazing job,” he said about the kitchen staff who are busy turning out pies with many locally sourced ingredients as well as a meat and veggie feature pie every day – they even utilize the beers in the dough and sauce.