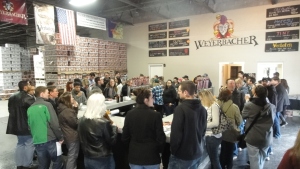 END_OF_DOCUMENT_TOKEN_TO_BE_REPLACED

On the morning of 4/2/14 we said goodbye to Philadelphia and, accompanied by plenty more rain, made our way into central Pennsylvania to tour Sly Fox Brewing Company’s new production facility in Pottstown. We got there as the taproom opened at 11 am and were thankful to meet with Director of Sales, Patrick Mullin. The name, Sly Fox, actually comes from a still existing tradition of fox hunting in the surrounding Chester County area and in that vein of locality, many of the beer names are based on local landmarks. The original brewpub location, Sly Fox Brewhouse & Eatery, was opened by Peter Giannopoulos in nearby Phoenixville in late 1995 and the Giannopoulos family still owns the brewery to date. In 2004, they opened up a 20 bbl production facility in Royersford in order to keep up with increased demand, however, growth was steady and by 2011 the restaurant was sold to former employees to make way for a larger operation in Pottstown which came online in 2012.