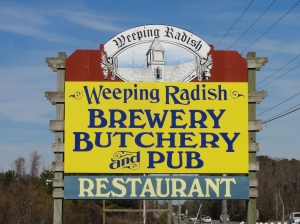 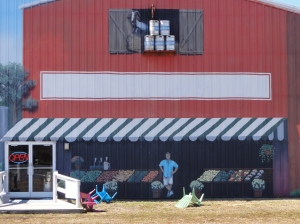 On the morning of Saturday 3/8/14 we woke up to a beautiful view of the Currituck Sound in the northeastern corner of North Carolina. After a hearty breakfast at a roadside café that just so happened to be the home base of the popular monster truck, Grave Digger, we drove just a few more miles south to the oldest microbrewery in the state, Weeping Radish Farm Brewery. If you have been paying attention to our travels, you know that NC has a booming craft beer scene and it all started here with the work of a Bavarian native, Uli Bennewitz. After moving to America he had a vision to share the delicious beers he had grown up with and decided to open up a traditional German style brewery and restaurant in NC’s popular Outer Banks. So he went to work and ordered brewing equipment to be shipped from Germany, later finding out that his grand vision was an illegal one. At that time it was against the law in NC to sell a brewery’s beer directly to consumers (a 3rd party distributor was required) so in 1985 Uli spearheaded changing those silly laws with a local senator and won, finally opening up his brewery in Manteo on July 4, 1986.